Heat shock induces a variety of biochemical changes in cells. In particular, the transcription of most genes and the translation of many mRNAs are stopped. On the other hand, the expression of genes coding for heat shock proteins starts. These changes allow cells to survive heat shock. 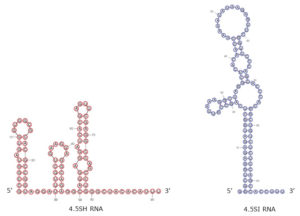 It seems likely that not only specific proteins but also certain small RNAs are synthesized in cells to endure heat shock. The transcription of Short Interspersed Elements (SINEs) by RNA polymerase III was shown to be induced by heat shock. Transcripts of Alu and B2 SINEs proved to inhibit RNA polymerase II in human and mouse cells, respectively. This mechanism is thought to underlie transcription suppression of most genes during heat shock.

Two small noncoding RNAs, 4.5SH and 4.5SI, were found in mouse and rat cells long ago. Although their nucleotide sequences are different, they share many features. Their length is about 100 nt; both are synthesized by RNA polymerase III, localized predominantly in the nucleus, and are found in certain rodent families covering about 70% species of this mammalian order. On the other hand, these RNA species demonstrate different lifetimes: 4.5SH has a short half-life (16-20 min), while 4.5SI is fairly stable (~22 h). This can be attributed to a 16-bp duplex formed by the ends of 4.5SI RNA, while 4.5SH RNA has no such structure (Fig. 1). The mouse genome contains three 4.5SI genes 40 kb apart from each other. The number of 4.5SH genes reaches 800, and all genes are arranged in 4 kb tandem repeats.

It was of interest if the levels of 4.5SH and 4.5SI RNAs change in response to heat shock. We investigated this problem by incubating mouse or rat cells at 45°C for 30 min (heat shock) followed by their recovery at 37°C. RNA was isolated from cells and these two RNA species were quantified throughout the experiment. The level of 4.5SI RNA remained steady in cells, while that of 4.5SH RNA increased 5-10 times 1-2 h after heat shock (Fig. 2A). The increased 4.5SH RNA level could be due to its transcriptional activation and/or delayed degradation. In vitro transcription in isolated nuclei was used to demonstrate that 4.5SH RNA synthesis did increase in response to heat shock (similar to B2 and Alu RNAs). Next, we studied the decay kinetics of 4.5SH and 4.5SI RNAs in cells subjected to heat shock. After heat shock and 1-h incubation at 37°C, the cells were exposed to the transcription inhibitor (actinomycin D). The quantitation of 4.5SH and 4.5SI RNAs demonstrated that the rate of 4.5SI RNA degradation was not significantly altered after heat shock, while that of 4.5SH RNA decelerated 4-7 times (Fig. 2B). Similar data were obtained in five cell lines. This is the first demonstration of a small noncoding RNA accumulated due to its delayed degradation. It is conceivable that the increased level of 4.5SH RNA helps cells to survive heat shock.