Plants rely on light as a source of energy. The availability of light is often a limiting factor for the process of photosynthesis. However, too much light can cause cell damage. Plants have numerous mechanisms of adjusting their physiology to the changing light environment, which act on different time scales, from minutes to days. Light induced relocations of chloroplasts inside plant cells belong to relatively fast mechanisms (Fig. 1). In weak light chloroplasts gather at the cell walls parallel to the direction of the incident light to maximize light absorption. This is known as the accumulation response. In strong light chloroplasts move to cell walls perpendicular to the light direction. This process, called the avoidance response, reduces the damage imposed by excess light. 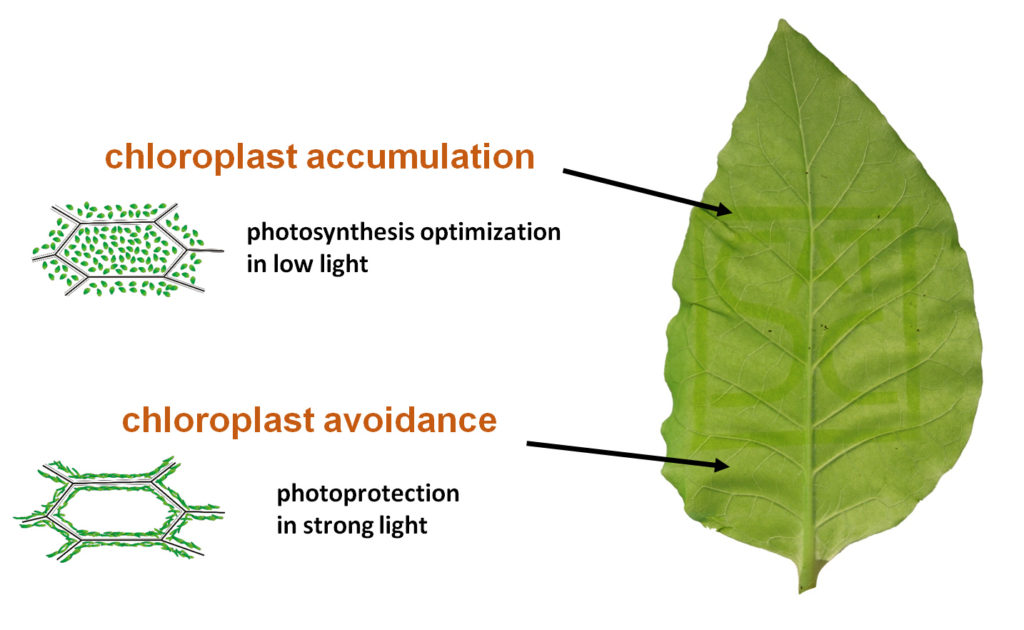 Fig. 1. Chloroplast movements in the Nicotiana leaf. First, whole leaf was exposed to weak light, triggering chloroplast accumulation. Then the leaf was covered with a mask with the Atlas of Science logo and illuminated with strong light. Parts illuminated with strong light turned pale green due to the avoidance response, revealing the logo. Chloroplast positions in the indicated parts of the leaf are presented on the left (top view). The direction of incident light is perpendicular to the cell surface.

Chloroplast movements happen locally and are a way to react to the dynamic changes of the environment. In land seed plants only blue light is responsible for eliciting chloroplast movements. It is perceived by photoreceptors known as phototropins. In the model plant, Arabidopsis thaliana, there are 2 phototropins, phot1 and phot2. These proteins function as light-driven molecular switches. After illumination their kinase part becomes activated. Phototropins share many functions and both can evoke numerous dynamic responses to light such as phototropism, stomata opening, chloroplast accumulation, leaf expansion and flattening. Phot1 has a higher light sensitivity and controls reactions in very weak light. Nevertheless, it cannot trigger full chloroplast avoidance in strong light. Phot2 requires higher light intensities for its activity and is responsible for the avoidance response. Mutant plants deprived of phototropin genes are a useful tool to study physiological aspects of light signaling. In the phot1 mutant, which bears only phototropin2, higher light intensities are required for chloroplast accumulation, whereas the avoidance response remains undisturbed. The phot2 mutant with only phototropin1 active, shows chloroplast accumulation at lower light intensities than wild plants, but is not capable of eliciting full chloroplast avoidance.

Pulses of blue light also trigger chloroplast movements. Depending on the light intensity and pulse duration, the reaction can be either transient accumulation or a biphasic response with initial avoidance followed by accumulation. The examination of chloroplast responses to light pulses in phototropin mutants reveal that the phot1 mutant responds much more weakly than wild type plants. Similarly as in continuous weak light, phot1 is responsible for the reactions to the shortest pulses. Conversely, the phot2 mutant displays stronger reactions to short light pulses than the wild type, which is rather surprising.

We proposed that this effect can be attributed to the molecular properties of the phototropins – their ability to form dimers. We show that phot1 and phot2 can form complexes, consisting either of the same type of protein (homodimers phot1-phot1 and phot2-phot2) or containing both proteins (heterodimers phot1-phot2). In leaves of normal plants all types of complexes occur. In very weak light, only phot1 is activated, but in two different types of complexes: phot1-phot1 and phot1-phot2. The latter one has somewhat lower capacity of signal transduction. This leads to signal attenuation, to avoid excess reaction to very weak light. In phot2 mutant plants, there are only phot1-phot1 complexes and the signal produced is stronger than in wild type plants, leading to strong responses to a mild stimulus.

Interestingly, this mechanism appears to be complemented by changes of phototropin mRNA and protein level in different tissues and during plant development. For example, seedlings which grow in dark need to be very sensitive to light. This allows them to grow towards the direction of even the weakest light that reaches the seedling in the soil. Therefore they produce only phot1, ensuring the strongest light sensitivity.