In general, each human cell contains 46 chromosomes: 23 chromosomes from each parent. Before a cell divides all chromosomes are duplicated. The cell has several mechanisms to ensure that during cell division the chromosomes are evenly distributed over the two daughter cells. However, when one of these mechanisms fails, a cell can lose or gain copies of one or more chromosomes. The resulting incorrect number of chromosomes is called aneuploidy. 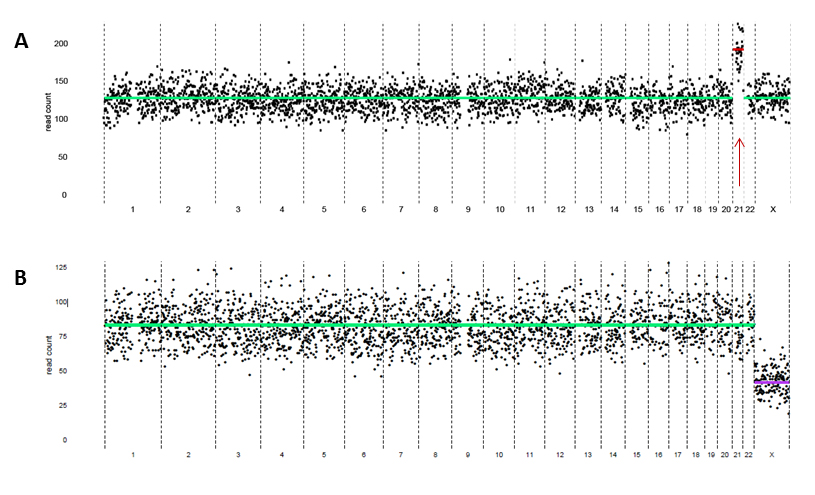 When we then counted the chromosomes in large numbers of individual brain cells from elderly people with and without Alzheimer’s disease, we found very limited aneuploidy in healthy aged individuals and no increase in Alzheimer’s patients, despite the high accuracy of our method.

Our results are in line with other sc-seq studies, which also report low levels of aneuploidy in the normal human brain. Our study is the first that uses sc-seq to investigate aneuploidy both in normal brain as well as brain affected by Alzheimer’s disease. In our study, we sequenced more than 1500 cells, many more than the previous sc-seq studies. However, our results are in contrast with the earlier FISH studies that showed substantial aneuploidy in human (Alzheimer’s) brain samples. We can think of two possible explanations: 1) FISH has a higher background, due to failure to bind or non-specific binding of the labeled DNA fragments, resulting in false positive aneuploid events or 2) we cannot formally exclude that we missed rare cells that were responsible for the aneuploid events detected in the FISH studies.