Systemic sclerosis (SSc) is an autoimmune connective tissue disease characterized by microvascular and immune response alterations followed by a progressive fibrosis, which is the consequence of an excessive production and deposition of extracellular matrix molecules, primarily fibronectin and type I collagen (COL1) at the level of damaged tissues mediated by activated myofibroblasts. Myofibroblasts express a-smooth muscle actin (aSMA), which characterize their phenotype, and may originate from different cell types including fibroblasts, endothelial and epithelial cells, and fibrocytes. Circulating fibrocytes are bone marrow progenitor cells expressing specific markers of hematopoietic (CD34, CD45, and MHC class II) and stromal cells (COL1 and COL3), and chemokine receptors (CCR2, CCR7). Moreover, fibrocytes express CXCR4, which regulates their migration into injured tissues and their differentiation into fibroblasts/myofibroblasts.

In vitro, fibrocytes differentiate from circulating CD14+monocytes into spindle-shaped, fibroblast-like cells, showing an antigen-presenting capability through the expression of HLA-DR and costimulatory molecule CD86, that allows the activation of the immune response in inflammatory and fibrotic autoimmune diseases.

The CTLA4-Ig fusion protein (abatacept) interacts with CD86 on cell surface of antigen presenting cells (APCs), such as macrophages and endothelial cells, contrasting the pro-inflammatory and angiogenic processes that characterize several autoimmune diseases, including SSc.

Since human fibrocytes seem to be APCs as well as an important source of fibroblasts/myofibroblasts in physiological and pathological tissue remodeling, the aim of this study was to investigate the possible effect of abatacept treatment in cultured human fibrocytes and skin fibroblasts isolated from the same SSc patients, as a new possible  approach for treating the fibrotic process in SSc.

Fibrocytes were isolated from peripheral blood mononuclear cells of SSc patients and healthy subjects (HSs) and cultured at baseline on plates containing fibronectin in DMEM at 20% of fetal bovine serum; after overnight culture, only adherent fibrocytes were cultured for further 8 days (T8) to allow their complete differentiation. Differentiated fibrocytes were maintained in growth medium or treated with CTLA4-Ig at different concentrations (10, 50, 100, and 500 μg/ml). Fibrocytes were characterized as CD45+CXCR4+COL1+cells and the presence of CD86 and HLA-DR on their cell surface was evaluated at baseline and T8 by Flow Cytometry. The gene expression of aSMA, COL1, CXCR4, TGFb1 and CD86 was investigated by quantitative real-time polymerase chain reaction. 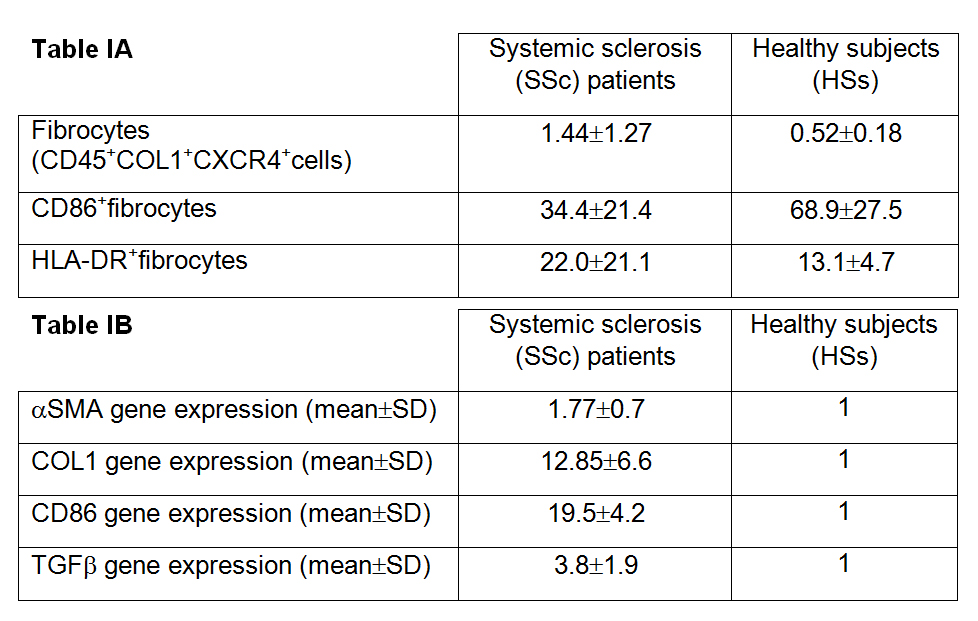 Tab. I A. Flow cytometry analysis of fibrocytes isolated from SSc and HS fibrocytes, identified among the CD45 cells, as CD45+COL1+CXCR4+cells, and relative HLA-DR and CD86 expression at baseline. Data were reported as mean±standard deviation of the percentage of fibrocytes (characterized as CD45+COL1+CXCR4+cells) in the population of circulating immune cells, percentage of the fibrocyte expressing CD86 and the fibrocyte expressing HLA-DR (evaluated in the fibrocyte population).
Tab. I B. Quantitative real-time polymerase chain reaction analysis of CD86, αSMA, TGFβ1, and COL1 gene expression in fibrocytes isolated from systemic sclerosis (SSc) patients and healthy subjects (HSs) cultured for 8 days (T8) in normal growth medium. Data were reported as mean±standard deviation.

Of note, treatment with CTLA4-Ig for significantly downregulated αSMA and COL1 gene expression in T8-cultured SSc fibrocytes (p<0.01, p<0.05 vs. untreated fibrocytes), whereas no effect was observed on TGFb1 and CXCR4 gene expression (Fig. 1).

Due to their high expression of CD86, circulating fibrocytes seem to be more responsive to abatacept treatment than the skin fibroblasts isolated from the same SSc patients. The described effect exerted by abatacept may represent a new approach for early intervention in SSc, therefore acting on progenitor cells (fibrocytes) before their final homing and differentiation into profibrotic myofibroblasts.