While members of all ethnic groups are at risk for type 2 diabetes, the risk in people of Asian Indian decent seems to be especially high.  This is of critical importance because the Asian Indian population is so large, with approximately 1.3 billion people living in India and another 25 million individuals of Asian Indian decent living in countries outside of India, worldwide.  Traditionally it is though that when individuals emigrate from their home country to another country, their risk for diabetes worsens.  However, in recent years, India has undergone very rapid economic and nutritional transitions, and therefore, the risk for diabetes in Asian Indians living in India might now be greater than their counterparts living abroad.  Furthermore, the reasons these two populations are at high risk might be different.  We therefore compared the percentage of people with type 2 diabetes and prediabetes (a state of elevated glucose that is between normal and diabetes) in Asian Indians living in an urban city in India to that of Asian Indians living in two urban centers in the United States.  We also compared the likelihood of getting diabetes or prediabetes by place of residence (either India or the United States). 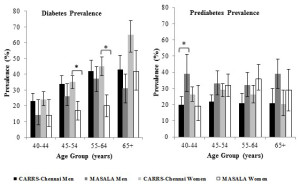 Fig. 1. Age specific prevalenece of diabetes and prediabetes by study and gender.

In conclusion, the results of our study indicated that there is a higher percentage of Indians in India with type 2 diabetes than in the United States, and those living in India are at higher risk of having the disease.  This occurred even though those in the United States had increased levels of common risk factors for diabetes such as older age and greater weight.  This could be due to the notion that India is in an early stage of the diabetes epidemic whereby those who are at the greatest risk develop the disease the fastest.  It is also possible that those who have immigrated to the United States have adopted healthier lifestyle and dietary factors and have greater access to insurance, thereby reducing their diabetes risk.  Our work thereby challenges the notion that migration increases diabetes risk, and highlights that the differences in diabetes risk between these two populations is not fully explained by differences in body weight or age alone.  Therefore further research is needed to fully identify the genetic and lifestyle exposures that underlie the elevated exposure for diabetes in Asian Indians.