There has been a recent upsurge of scientific reports about the benefits of regular physical exercise for general health and particularly for mental health.  Healthy diet and physical activity have emerged as promising low-cost measures for protection against a variety of diseases including Alzheimer’s and other forms of dementias. Additionally, regular exercise is known to stop declining memory and improve recall in a variety of conditions including aging and chronic stress. This has been shown both in humans and in animal models of these disorders. For example, experiments from this laboratory clearly showed that regular exercise prevented memory impairment in an animal model of Alzheimer’s disease (see Figure 1).

As an indicator of memory, we also induced and recorded brain electrical activity directly from brains of anesthetized animals to make sure that what we saw in memory test is reflected in brain activity in two areas of the brain known to be responsible for memory formation (see Figure 2). We also wanted to compare the effect of both Alzheimer’s disease and exercise on the two areas of the brain. One area is called “Cornu Amonis” and the other “dentate gyrus”. The latter area has the unique ability to generate new nerve cells.  We compared the effect of Alzheimer’s dementia and exercise on brain activity as well as on levels of enzymes and protein molecules essential for memory formation. 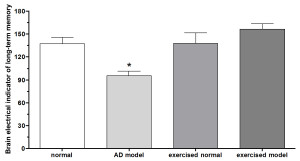 Fig. 2. The induced electrical indicator of memory was significantly impaired in the AD model (marked by *), but not in the exercised AD model.

In both areas the disease produced similar deleterious effects on the levels of the enzymes and protein molecules, which was prevented in the exercised Alzheimer’s disease model. One of these molecules is known as brain-derived neurotropic factor (BDNF), a protein that nurtures, repairs and maintains the health of brain cells, was markedly elevated by exercise in both areas of the brain, which may indicate an important role of this particular protein molecule in the beneficial effects of exercise.  However, brain electrical activity recordings from the “dentate gyrus” showed this area to be somewhat resistant to the effect of the disease. We speculate that this effect may be due to the fact that the “dentate gyrus” has the ability to generate new nerve cells to replace some of the ones damaged by Alzheimer’s disease.

In general, we conclude that the protective effect of regular exercise can be a promising therapeutic measure for countering or delaying the devastating effects of Alzheimer’s disease pathology.

Comparison of the Effect of Exercise on Late-Phase LTP of the Dentate Gyrus and CA1 of Alzheimer’s Disease Model.
Dao AT, Zagaar MA, Levine AT, Alkadhi KA
Mol Neurobiol. 2015 Dec 12