Fruit and vegetables are made from multiple constituents and appropriate daily consumption provides positive health benefits. The bright colouration of fruits and vegetables comes from the polyphenol content and these in part are attributable to the health benefits. Anthocyanins are a type of polyphenol and have positive effects upon the cardiovascular system, including altering blood flow. Berries provide one of the highest dietary sources of anthocyanins, with the growing conditions the largest influencer of anthocyanin content. As a result, New Zealand Blackcurrant (Ribes Nigrum) has a high anthocyanin content. 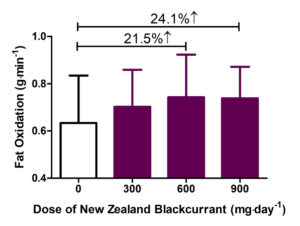 Blackcurrant intake has been shown to increase blood flow to a muscle following typing (i.e. a low intensity activity). Increasing blood flow to a muscle during exercise has important implications for performance and metabolism as there is an increased delivery of oxygen and nutrients such as circulating carbohydrates and fats. Supplementation of 300 mg·day-1 blackcurrant extract in trained cyclists for 7-days has shown an increase in fat use (i.e. fat oxidation) during 10-minutes cycling at 65% of their maximal aerobic capacity (VO2max). The effects of different doses of New Zealand blackcurrant on fat oxidation during long duration cycling has never been examined in this population.

In our study, we used fifteen male endurance trained men who performed cycling exercise for 6 – 10 hours a week and had them undergo 4-conditions of no dose, 300, 600 or 900 mg·day-1 of New Zealand blackcurrant extract. The dosing order was in a Latin square design, meaning that each participant received the doses in a different order which was randomly allocated. Each dosing condition of New Zealand blackcurrant (CurraNZ) was taken for 7-days and the cyclists were tested for their fat and carbohydrate during 120-minutes of cycling at 65% VO2max on a cycle ergometer in the laboratory.

We observed that fat oxidation during the 120-minutes cycling was increased with New Zealand blackcurrant. The 600 and 900 mg∙day-1 doses compared to no blackcurrant increased fat oxidation by 21.5% and 24.1%, respectively. There was no change in the oxygen consumption, carbon dioxide production, heart rate or blood glucose between any of the doses.

The findings from this study provided the first observation of the effect of different doses of blackcurrant anthocyanins on increasing fat oxidation during moderate intensity cycling exercise. These responses could have implications for nutritional strategies to promote exercise performance and sparing of limited carbohydrate stores during exercise. There may be implications for weight loss, however further research is needed to confirm this.