Digital model of the cancer cell

We are postulating that human cells should be analyzed as analog/digital systems (biological computers) capable of digitalizing the analog information from the environment, processing that information in digital form and producing a programmed action according to that information. That view should also be applied to the cancer cells with important consequences for further research in cancer treatment.

“In the beginning was the Word”, and really the information and data are the most important part of our being. Storing data in mechanical way is cumbersome and space/time consuming task. The digitalization enables us to store and process data more efficiently. The computer can be made of mechanical parts but then your laptop would have a size of a skyscraper and would not fit in your lap. If we have found the way to solve that problem, why shouldn’t the nature came to the same solution? We think that it did and that the human cell is in fact a biological computer consisting of digital nucleus surrounded by analog-digital-analog converters in cytoplasm and mechanical receptors/effectors on the membrane (Fig. 1.). 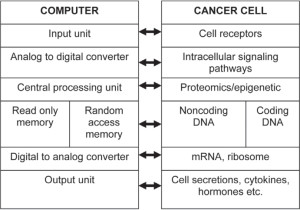 The DNA consists of four bases that is comparable to the silicon digital systems with only difference that silicon systems has only two bases (0 and 1). The 4 bases system is mathematically even more efficient. We understand the function of only some 20% of the DNA digital code. That part is coding the proteins and other important molecules in the organism. Some 80% of DNA is so called non-coding DNA. If the cell is biological computer, that non-coding DNA should represent the program code. The coding DNA is static, and we have “broke the code” by comparing it to final products. The problem with non-coding DNA is that it cannot be analyzed the same way. It is not static, and should be observed in the time-line of its activity with the final intention to “broke the program code”. It is much more difficult than to break the data code but we think that that should be done and further we explain our reasons.

In our treatment of cancer, we have focused on mechanically stopping the specific cancer activities. By that, we are interacting only with the analog part of the system. We think that origin of the cancer lies in the digital part of the system as if there is a programmed cell action to behave as a cancer cell to protect the genetic material like the sporulation of some bacteria. Any try to mechanically block its execution should provoke the reaction of the program with intend to overcome the obstacle. That is what we usually see in cancer treatment. When we block one important cancer mechanism, the disease usually comes back in other form immune to our treatment and even more aggressive than before. The only way to deal with that is to stop the program and for that we have to locate it in the cell. Our suggestion is that we should search in the non-coding DNA in real time and with methods used to analyze unknown program code. If the cancer is a program error it should be corrected that way and mechanical approach is of limited use so we have to change our focus from mechanical to digital in cancer research and treatment.

One Response to Digital model of the cancer cell