Does humour undervalue the importance of safety information contained in pre-flight safety briefings?

Most readers would agree they experience variations in mood from time to time. In some circumstances, the trigger or origins of this change in mood is difficult to determine. What research has revealed, is that mood is linked to performance. The performance of a person on a given task is more likely to be superior when that person is in a positive mood (happy), compared to when he/she is in a negative mood (sad). For athletes, this edge may be enough to secure victory in their sporting arena. For retail businesses, this may translate into increased sales. What is less clear however, is the implications of this relationship from a safety perspective. 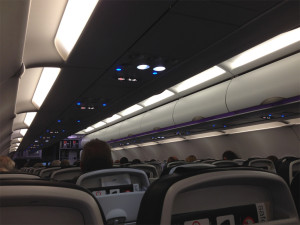 Take passenger safety onboard aircraft for example. Prior to every flight, passengers are provided with information about the safety features of the aircraft they are onboard. This is provided in the form of a pre-flight safety briefing. Passengers are expected to recall and apply this information in the event of an emergency. Presumably, if they were in a positive mood prior to the emergency, their recall of the safety information as well as their performance in the emergency would be superior to if they were in a negative mood. However, there are limitations to the extent to which mood manipulations last. Considering most aircraft accidents occur in either the departure phase (i.e., take-off) or the landing phase of flight, manipulating mood prior to these phases of flight may have important safety outcomes. In contrast to this expectation, we found when we manipulated the mood of our research participants using a humorous pre-flight safety briefing, their ability to recall key safety messages presented in the briefing declined. Mood was measured using a well established scale called the Profile of Mood States Questionnaire Short Form. Participants exposed to what most commercial passengers would call a standard briefing, one that is void of humour, recalled on average 47% more key safety messages than participants exposed to the humorous briefing. These results suggest that there is a trade-off between entertainment and education; the greater the entertainment value, the poorer the retention of key safety messages.

While this result does not reflect favourably on the use of humour in safety briefings, in terms of information recall, there may be other benefits to using humour in these briefings that were not measured in our study. As we all know, despite the important safety information presented in pre-flight safety briefings, the manner in which the information is presented can make it difficult at times, to remain attentive. Hence, it is possible by presenting information in a humorous manner, it encourages individuals to watch or maintain watching these briefings. Humour may also improve behaviour in an emergency evacuation, namely reducing egress time during the evacuation.