Does the ethnomedicinal uses of the sour plum tree correlate with its ethnopharmacological properties?

Ximenia caffra Sond. (Fig. 1), commonly referred to as “sour plum” is a common and popular medicinal and fruit tree in the dryland zone in central, eastern and southern Africa. The generic name ‘Ximenia’ commemorates a Spanish priest Francisco Ximênez who wrote about the plants of Mexico in the 17th century while the specific name ‘caffra’ is from the Hebrew “kafri” meaning “person living on the land”. A survey of literature showed no fewer than 105 vernacular names for Ximenia caffra, and this long list of vernacular names indicates that local people in central, eastern and southern Africa have an active interest in the species. As local people rarely give vernacular names to plant species they do not use. The species bear edible and fleshy fruits that have constituted the African diet since ancient times. From the seeds, local communities produce ximenia oil used as a moisturiser, for producing anti-ageing skin care products, eye-care and anti-acne products, shampoo for dry, fragile and damaged hair, soap, lipstick and lip balm. The bark, fruits, leaves, roots and seeds of the sour plum are reported to possess diverse medicinal properties and cure various human and animal ailments and diseases throughout its distributional range. 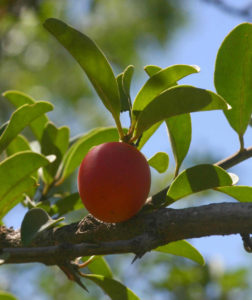 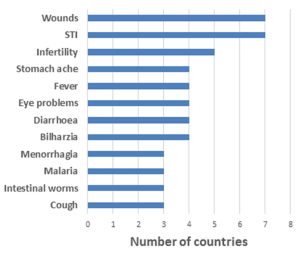 Based on literature records documenting traditional and potential medicinal uses of Ximenia caffra, many researchers have investigated its phytochemical and pharmacological properties aimed at identifying the compounds responsible for its wide use as traditional medicine. Recent research on Ximenia caffra focused primarily on evaluating the anti-amoebic, antibacterial, antifungal, HIV-1 reverse transcriptase (RT) inhibitory, anti-inflammatory, antioxidant, antiparasitic and insecticidal, antiproliferative, non-mutagenic and toxicity activities of the species. The phenolic, flavonoids, tannins, phytosterols and fatty acids appear to be the major plant derivatives and have been demonstrated to be the main active ingredients in Ximenia caffra seed oil, fruit pulp and peels, leaves and roots. Although contemporary research involving Ximenia caffra is promising, it is too preliminary and sometimes too general to be used to explain and support its numerous ethnomedicinal uses. Therefore, further more studies should identify the bioactive components of the species, details of the molecular modes or mechanisms of action, pharmacokinetics and physiological pathways for specific bioactives of Ximenia caffra.

Ximenia caffra Sond. (Ximeniaceae) in sub-Saharan Africa: A synthesis and review of its medicinal potential.
Maroyi A
J Ethnopharmacol. 2016 May 26