Due to the steadily increasing worldwide demand for energy and the limited resources of fossil fuels such as crude oil, coal, and natural gas, renewable and green energy sources are gathering increasing attention by scientific researchers and politicians. To save fossil fuels, reduce the CO2 emission, and thus protect the environment, primarily photovoltaic, hydro and wind power are discussed. However, as the sun does not always shine and the wind does not always blow, the resulting fluctuations in power production have to be balanced in order to ensure a stable and continuous energy supply. For this purpose, high performance energy conversion and storage systems are strongly required. These stationary energy storage systems should be safe, cheap, and compact, whereupon the weight is second-tier for these applications. 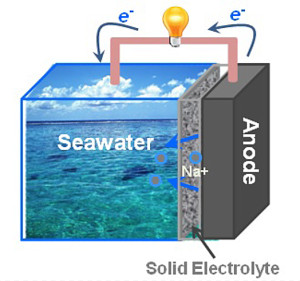 Fig. 1. Scheme of the seawater battery developed in this work. Upon electrochemical discharge, illustrated in the scheme, Na is released from the anode and reacts with water and oxygen from the seawater cathode to form sodium hydroxide. This process provide energy to power, for instance, an electric vehicle.

The novel seawater-battery uses the seawater as cathode, a ceramic sheet to separate the cathode from the anode compartment, an ionic liquid (thus a salt, which is liquid at room temperature) as electrolyte, and a tin/carbon composite as anode. Upon operation, the seawater is circulated within the cathode compartment and provides sodium ions to charge the anode. During the discharge, this means during the energy supply, the sodium is released from the anode and reacts with water and oxygen from the seawater cathode to form sodium hydroxide. Since the cathode is continuously supplied the system represents a hybrid between a battery and a fuel cell.

The seawater-battery offers various advantages making this system an attractive supplement to existing battery technologies. On the one hand, seawater can be considered as an inexhaustible source of sodium making the seawater battery cost-efficient. Additionally, the use of seawater is eco-neutral, thus this battery is a step forwards to an environmentally friendly energy storage system. Moreover, more than ¾ of all nations have excess to the sea, thus the worldwide dependence on the limited resources of lithium would decline. Another critical issue in batteries is safety. In commercial battery systems organic electrolytes are utilized, however, these electrolytes are highly flammable, environmentally harmful, and toxic. Within the seawater-battery, these electrolytes are replaced with ionic liquid electrolytes, which are characterized by very low flammability and high stability, the safety of the battery can be significantly enhanced.

In conclusion, this new battery system offers cost-efficient, environmentally friendly, and safe stationary energy storage. One possible application could be, for instance, the conversion and storage of energy from waves.