Effect of the new hybrid 3,5-dipalmitoyl-nifedipine on the ischemia / reperfusion simulation

The myocardial ischemia process is a global health problem. Damage after myocardial ischemia and reperfusion (I/R) is the leading cause of morbidity and mortality globally. Hypertensive patients are most affected by I/R. This work investigated the acute effects of the calcium channel blocker nifedipine (NIF) and its new fatty hybrid derived from palmitic acid, 3,5-dipalmitoyl-nifedipine, compared to endocannabinoid anandamide during the process of inducing ischemia and reperfusion in cardiomyoblast H9c2 heart cells. To assist in mitigating the damage caused by I/R, we report in this study a convenient synthesis of novel hybrid molecule, 3,5- dipalmitoyl-nifedipine (DPN), via a one-pot Hantzsch multicomponent reaction using sulfamic acid as an inexpensive and nontoxic catalyst (Fig. 1). 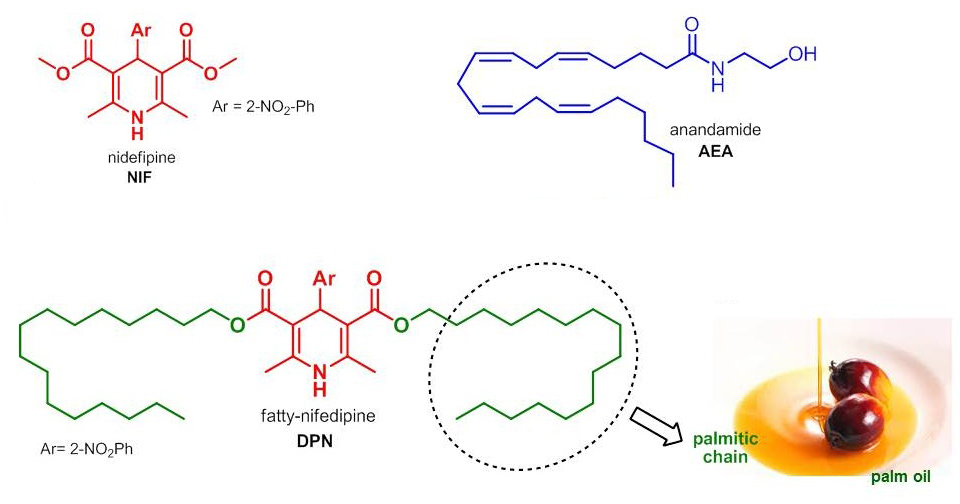 The in vitro antioxidant assays were designed to mimic the oxidation-reduction reactions commonly occurring in the live biological systems and are used to estimate the antioxidant potentials of various chemical and biological samples. In this work, the antioxidant activities of the synthesized compounds were evaluated by several in vitro assays such as 2,2-azinobis-3-ethylbenzothiazoline-6-sulfonic acid (ABTS) radical cation scavenging activity, 2,2-diphenyl-1-picrylhydrazyl (DPPH) and radical scavenging activity, ferric reducing antioxidant power (FRAP). In in vitro assays, 3,5-dipalmitoyl-nifedipine showed more antioxidant activity than nifedipine. The cardiomyoblasts were treated in 24 or 96-well plates (according to the test being performed) and maintaining the treatment until the end of hypoxia induction. The molecules were tested at concentrations of 10 and 100mM, cells were treated 24 h after assembling the experimental plates and immediately before the I/R. Cell viability, apoptosis and necrosis and generation of reactive oxygen species were evaluated. The results showed that the presence of the two palmitic acids attached to the NIF, a classical calcium blocker channel, is capable of significantly reduce oxidative stress and increase cell viability, in addition to decrease cell death from apoptosis and necrosis

These results indicate the ability of this molecule to act as a powerful reactive oxygen species (ROS) scavenger. Cell viability was highest when cells were induced to I/R by both concentrations of anandamide and the higher concentration of DPN. These treatments also reduced cell death. Therefore, it was demonstrated that the process of hybridization of nifedipine with two palmitic acid chains assigns a greater cardioprotective effect to this molecule, thereby reducing the damage caused by hypoxia and reoxygenation in cardiomyoblast cultures. This result demonstrate increases the antioxidant effect and can also aid in the treatment of other diseases, because the ingestion of drugs with increased antioxidant effects can protect against cardiovascular disease. Thus, the novel hybrid molecule 3,5-DPN may act as pharmacological pre-conditioning for cardiovascular protection against I/R injuries by decreasing ROS in cardiomyoblasts subjected to I/R conditions and was also found to improve cell viability by 138.7% in a dose-dependent manner.