English borrowing: 5+ tips on how to write borrowed words correctly

How often do you dig yourself deeper into a hole how to write affect or effect, lay or lie, grey or gray? If it happens to you very often, what to say about spelling such words like Renaissance, anonymous or entrepreneur? All these ‘strange’ words are usually taken from other languages – French, German, Latin, Italian, Arabic, etc. For example, the word ‘ketchup’ is borrowed from the Chinese language and the origin of the word ‘cartoon’ goes back to Italian. The English language has been described by David Crystal as an “insatiable borrower.” But not all foreign words are easy to remember and write correctly.

So this article is aimed at helping you write all the problematic words in English correctly. There are some secrets that can help you write words borrowed from the other languages without a moment’s hesitation – “Do I need to write ‘a’ or ‘e’ here?”

What Is Known About English Borrowing?

The English language has been described by David Crystal as an “insatiable borrower” – more than 120 other languages with which English has been in contact for a long time have served as sources for the contemporary vocabulary of English. Look at the picture below and know that the words you use today without a second thought are taken from the other languages. 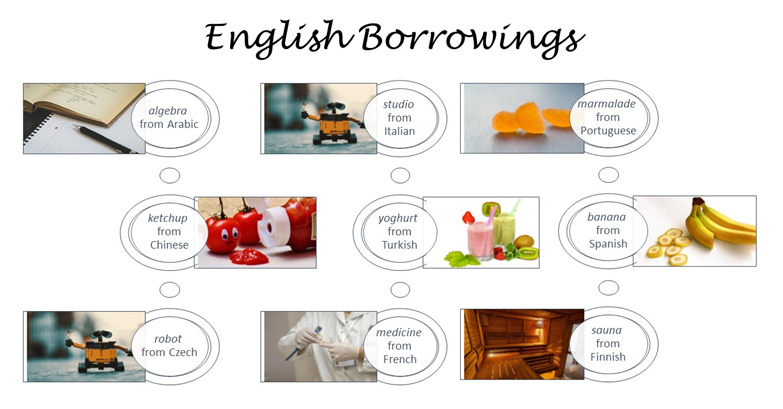 There are different periods of borrowing – it’s a process when words are adopted by the speakers of the English language from a different language. In fact, in the age of exploration (that started at the beginning of the 15th century and lasted until the end of the 18th century), the vocabulary of English was noticeably expanded by thousand explorers, traders. Often, it took place in spoken form. Arriving in Scotland, they heard the word ‘whisky’ and, sure enough, Englishmen apprised this drink and brought it to their motherland. In Germany, they saw such a fairly slow dance as waltz, and, certainly, they liked it and started dancing in England. In Australia, they saw animals jumping and carrying their babies in a pouch called as kangaroos. They didn’t take these animals along, but they described them to their friends and relatives. As a result, many thousands of English words have been acquired in this way.

Just open an English dictionary to know the origin of the word you’re going to write. Yes, it may seem to you as an insignificant step. But when you deal with difficult words, don’t skip this step – make sure that you will spell them correctly. Below we’ll explain to you how to avoid possible mistakes in foreign words. Read attentively not to spend more time on spelling words in English.

5 Tips on How to Spell Borrowed Words Correctly

If you think that it is impossible not to make a mistake in the word ‘antidisestablishmentarianism’, you’re right! But with words like ‘conscience’ or ‘millennium’, everything is much easier. There are particular spelling rules relevant to some borrowed words. We are ready to help you by providing top 5 effective tips on how to spell borrowed words properly. Look!

All Is Not Lost: A Few General Spelling Tips

If you are still making mistakes in some words (after all, there are specific words that are unaffected with any spelling rule – hors d’oeuvre, pharaoh, rendezvous or convalesce), take the following steps:

However, there are some complications in any way of checking spelling. For example, if you intend to make sure in spelling with a dictionary in hands, it may take more time than you plan on writing an essay. In the case when you use an online grammar corrector, your texts are checked with a machine. So it is better to find someone competent in editing an academic paper – a qualified editor from Analyze.AcademicHelp.net is ready to help you with analyzing your written paper in all possible aspects. This online service includes checking for errors in grammar, punctuation, style, organization, citations, and content consistency. And what is more important for you – it is provided by a real expert in editing. So stop making most mistakes in your writing even today!