Many smokers are dissatisfied with their tobacco consumption. Smokers often fear significant disadvantages such as intolerable craving, irritability and increased anxiety. This kind of misgiving is especially pronounced among heavy dependent smokers.

This study aims to answer the question to which extent even heavy nicotine dependent smokers can benefit from a 3-week inpatient smoking cessation program. 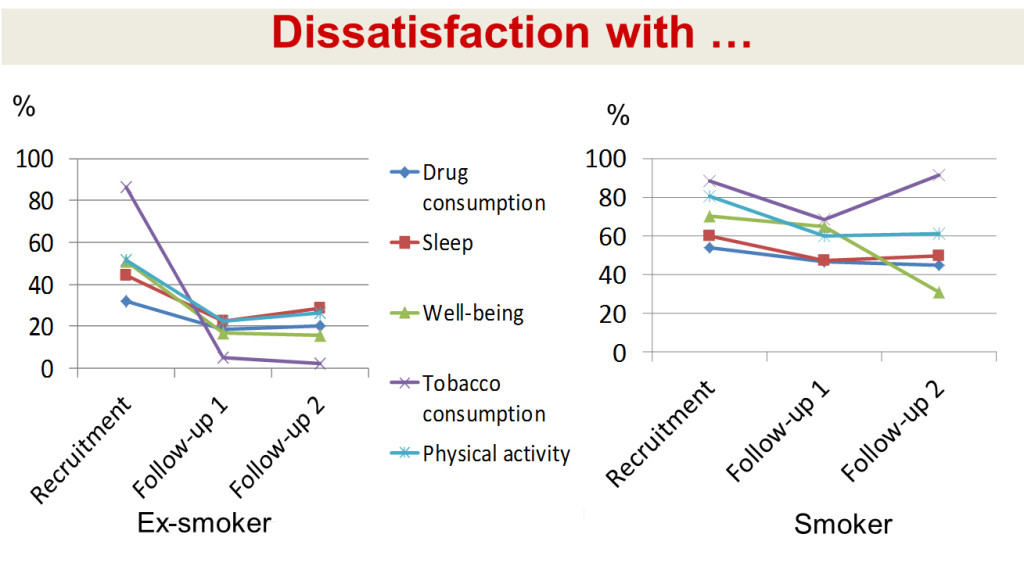 The program includes three components broken down on a week by week basis: 1) analysis of the own smoking behavior (smoking is still permitted) 2) training of strategies and alternatives, which have already been treated in the first week (smoke-free period starts) 3) to strengthen and stabilize non-smoking behavior (relapse prevention). After completing the three week in-patient smoking cessation program, participants have the option to attend, on a voluntary basis, monthly so called jour fixe-meetings and are invited to two follow-ups, 6 and 12 months after therapy.

Of the 270 participants included in this study till end of therapy all of them – or let’s say nearly all – stopped smoking. At the first follow up 6 months after therapy 45 % had become ex-smokers, about 30 % had started smoking again and about one quarter did not show up, so that we have no data. At the second follow up we have 43 % ex-smokers, 34 % smokers and 23 % are unknown.

In the following a comparison on lifestyle satisfaction of the successful participants (called ex-smokers) and the less successful patients (called smokers) is described.

Initially, many of the participants, reported to be dissatisfied with their sense of well-being and stated to be aware that this has a negative influence to their health. In the group of smokers no statistically significant changes were observed on these matters 12 months post program completion but significant fewer ex-smokers reported to feel dissatisfied. Comparable results are found concerning negative effects on health.

Similar results are available in terms of sleep. At the start of therapy almost half of all smokers stated to be dissatisfied with their sleep pattern fearing negative consequences in terms of health outcomes. Throughout both follow-up visits a significant reduction of such unhappiness was found in ex-smokers but remained the same in smokers.

Prior to starting the smoking cessation program, ex-smokers and smokers were dissatisfied with their level of physical activity. Throughout the 12 months, this attitude decreased from 80% to 60% in smokers although not at a significant level. Significant were the findings for ex-smokers however. At follow-up 2 only 25% (p=0.012) reported to still feel dissatisfied about their level of physical activity. A significant reduction of the estimated negative influence on health due to the lack of exercise was only seen among the ex-smokers during the observation period. 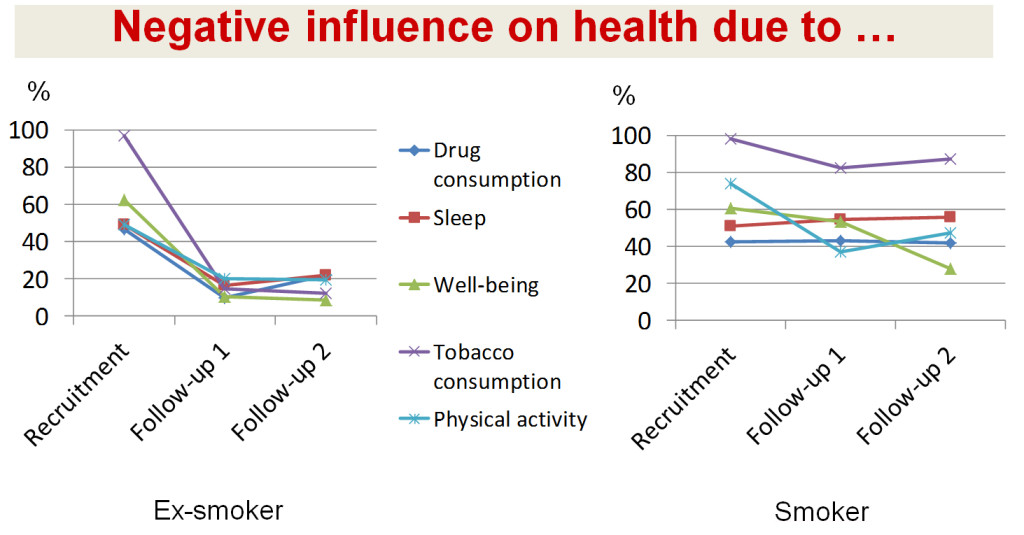 One important aspect often going hand in hand is smoking and weight. Studies show that individuals who are successful in remaining smoke free are more likely to experience weight gain than individuals who either continue to smoke or relapse. Based on our findings even less successful participants experienced a significant weight gain. Based on this observation the question is raised if not the resulting weight gain due to smoking cessation is the true malefactor for relapse. In my opinion we should pay much more attention to a possible weight gain after stop smoking even before and at the very beginning of such a therapy.

The three week in-patient smoking cessation program offered in Austria enables even heavy nicotine dependent smokers the possibility of reaching tobacco abstinence. Such success does not only lead to a significant improvement of health but also an increase in quality and satisfaction of life and well-being.

The author wish to acknowledge and thank the team of the Sick Fund of Upper Austria who, with great commitment, carry out the inpatient smoking cessation program at the Kurheim Linzerheim, Bad Schallerbach, Austria.