The overuse of chemical nitrogen fertilizer in agriculture has caused serious environmental issues around the world. Legume crops play important roles in sustainable agriculture and are characterized by their ability of forming nitrogen-fixing nodules, in which rhizobia infect intracellularly and atmospheric nitrogen is reduced to ammonium in specialized rhizobial cells (bacteroids). In addition to those genes directly involved in nodulation and nitrogen fixation, to achieve effective nitrogen-fixing symbiosis, rhizobia need to fine-tune their background regulation network. For example, genetic evidences from this laboratory suggest that a conserved nitrogen phosphotransferase system is essential in Sinorhizobium fredii symbioses with soybean and pigeonpea. 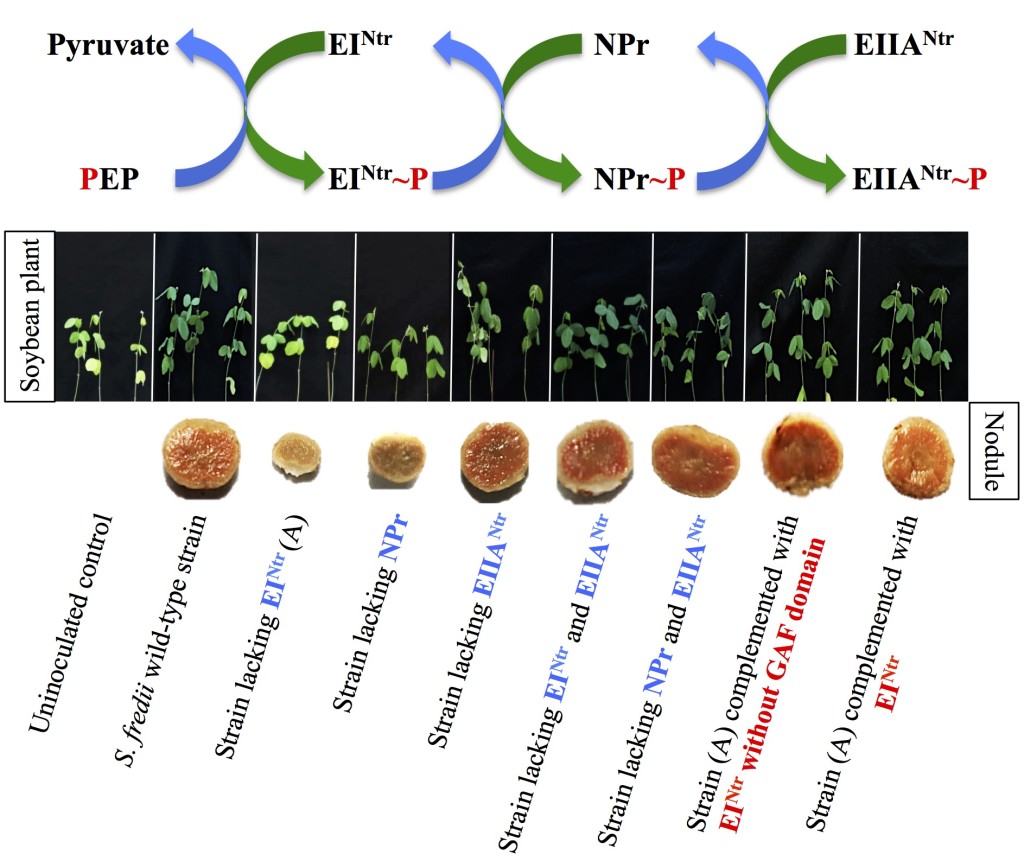 In bacteria, there are two general types of phosphotransferase system (PTS): the sugar PTS, mainly involved in carbohydrate transport, and the nitrogen PTS, which exerts regulatory functions. The nitrogen PTS consists of enzyme I (EINtr), histidine protein (NPr), and enzyme IIA (EIIANtr). The active phosphate moiety derived from phosphoenolpyruvate (PEP) is transferred through EINtr and NPr to EIIANtr (Fig. 1). In S. fredii, deletion mutants of EINtr or NPr were impaired in symbiotic performance on legume hosts, while the mutant without EIIANtr could still establish effective nitrogen-fixing nodules (Fig 1). However, the further deletion of EIIANtr in the mutants lacking EINtr or NPr could relieve the nitrogen starvation phenotype of legume plants inoculated with corresponding mutants (Fig 1). These findings suggest a negative regulation role of unphosphorylated EIIANtr in symbiosis.

Earlier reports suggest that the GAF domain of EINtr is dispensable for the PEP-dependent autophosphorylation of EINtr, but is required for the inhibition of EINtr through its binding of glutamine, which is a canonical signal of nitrogen availability. The symbiotic defect of a S. fredii mutant lacking EINtr was recovered by expressing EINtr with or without the GAF domain (Fig. 1). These findings imply that the putative nitrogen-sensing GAF domain is dispensable in S. fredii symbiosis with hosts, possibly due to a limited level of glutamine within bacteroids. This is consistent with that nitrogen-fixing bacteroids export fixed nitrogen to their legume hosts, while down-regulate their own nitrogen assimilation machineries.

These results suggest that the conserved nitrogen PTS has been integrated in the regulation network of S. fredii symbioses with legume crops. However, multiple outputs, as indicated in nodule occupancy and carbon source utilization tests, could be associated with different components of the nitrogen PTS and remain largely unexplored.