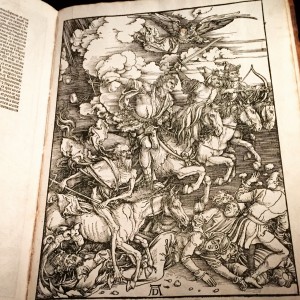 A recent conference in Oxford brought Boris Sobolev to an exhibition showing Dürer’s Four Horsemen, among other rarities. The connection between images on the print and the reality of the hip attack did not escape him. The first horseman, Conquest, the trauma itself, comes to defeat the frail through pain, immobility and suffering. The second horseman, War, brings the battle of competing needs to our health care, making hospitals prioritize one urgent procedure over another. The horseman with scales comes to dispense access to care. And the rider of a pale horse comes to harvest death toll among the injured.

We retrieved 42,435 hospitalization records of hip fracture patients aged 60 years or older, who were discharged after admission for hip fracture surgery between 1990 and 2005 in British Columbia, Canada. We then determined time of death for these patients.

Our results are the first to show that second hip fracture increases the risk of death above that anticipated for an increase in age for both men and women. Effective secondary prevention strategies could not only reduce complications after hip fracture but could also save lives.