Fibroblasts in rheumatoid arthritis: From friend to foe

Our joints are composed of tissue-resident cells, called fibroblasts, which are responsible for maintaining the structure of the joint and repairing damaged tissue. Additionally, we and others have shown that fibroblasts can also influence the types and numbers of immune cells (leukocytes) that enter into the tissue in response to inflammation. They do this in part, by talking to neighbouring cells that line our blood vessels – called endothelial cells. The movement of leukocytes out of the blood and into tissue is an essential step to protect and fight infectious agents, and to repair damaged tissue.

In healthy individuals the endothelial cells act as a barrier, separating the blood from the tissue, imagine a closed turnstile at a football ground. During inflammation, endothelial cells become “stimulated” by agents (known as cytokines) released by neighbouring cells (e.g. fibroblasts) responding to danger signals in the tissue (e.g. bacteria). In this situation, leukocytes are able to stick to endothelial cells and move through them into the tissue. This process is tightly regulated by a series of check-points to control the number of leukocytes entering the tissue – imagine ticket operated turnstiles. However, faults in these check-points can allow too many leukocytes to enter the tissues leading to uncontrolled inflammation and tissue damage – imagine open, unmanned turnstiles. This is a common feature of immune-mediated inflammatory diseases such as Rheumatoid arthritis (RA).

Fig. 1. Fibroblast effects on leukocytes. Fibroblasts in resolving patients prevent the recruitment of leukocytes into the joint. However, in very early RA this anti-inflammatory response is lost and cells can be recruited. Furthermore, late RA fibroblasts actively recruit leukocytes to the joint.

We created an artificial joint blood vessel, where we grew endothelial cells and fibroblasts on opposite sides of a porous membrane, allowing the two cell types to talk to one another. Using a series of tubes to simulate the blood vessels and a pump to simulate blood pressure, we flowed leukocytes over the top of the endothelium, and looked at how they interacted with the endothelium through specialised microscopes.

Fibroblasts from patients with resolving arthritis limited the number of leukocytes sticking to activated endothelium. However, fibroblasts from patients with very early RA have lost this ability, allowing more leukocytes to stick (Fig. 1). As disease progresses, the fibroblasts gain the ability to activate the endothelium in the absence of other cytokines, further amplifying leukocyte entry into the joint (Fig. 1). Thus RA fibroblasts transform from being a friend, which moderates inflammation and allows it to switch off, to a foe driving the inflammatory response. 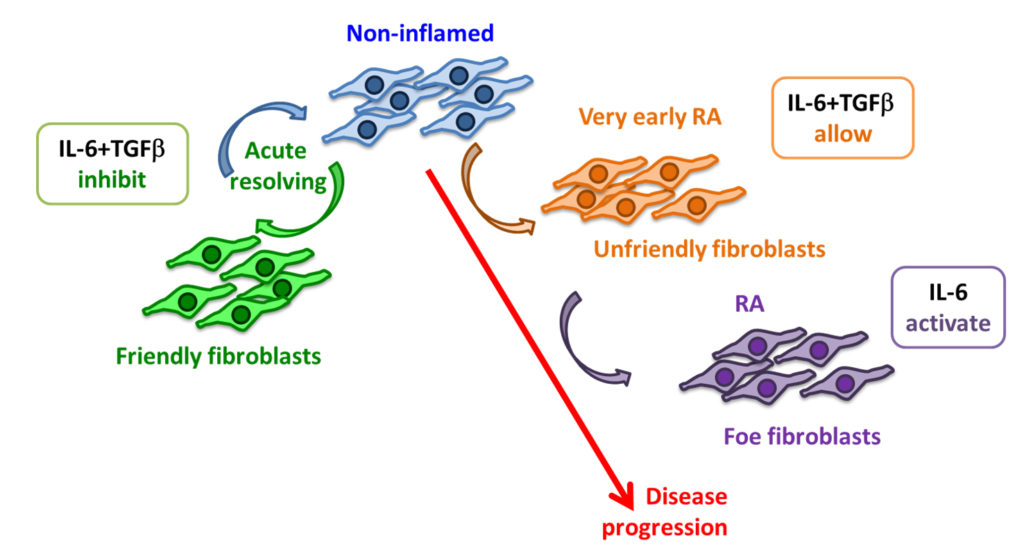 In summary, fibroblasts undergo two distinct changes in how they communicate with endothelial cells to regulate leukocyte entry into the joint during the progression of RA. Firstly they lose their anti-inflammatory effects and at later phases of disease acquire the ability to drive a pro-inflammatory conversation with endothelium. Further insights into the bio-molecular agents involved in these conversations may identify novel treatment targets from patients with RA, which may specifically target these conversations but may also be different for patients at different phases of disease.