We studied the effect of oil viscosity on the submergence characteristics of light floating oils that float on water (silicone oil with viscosities ranging from 10 cSt to 1000 cSt) by addition of granular particles (fine and medium sand with average particle diameters of 0.28 and 0.72 mm, respectively). Silicone oils submerged in water by forming granular encapsulated oil sacks. We observed that viscosity of the silicone oils affected the size, shape, and mobility characteristics of the submerged oil sacks, which had quasi spherical shapes. Lower viscosity silicone oils formed smaller globules, while higher viscosity silicone oils formed larger globules. This is due to the lower stretching ability of low viscosity oils, which makes it easier to detach from the floating phase (without stretching), hence, forming smaller oil globules. The oils sacks submerged with fine sand had encapsulation covering over 80% of the oil-water interface. With the medium sand, the encapsulation coverage was less than 50% of the oil-water interface. 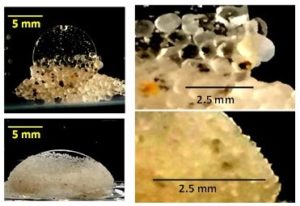 Initially, the submerging oil sacks had more sand entrapped within the oil than necessary to make them to submerge by gravitational forces. Over time, some sand was released from the encapsulation, especially for the oil sacks with the larger diameter and those formed with larger size of particles. This resulted in a smaller area to be encapsulated (at the lower portion of the submerged oil sacks), hence, causing vertical elongation of the sack due to lower density of the oil than water (i.e., buoyancy effects).

After the stabilization of the encapsulation, the oil sacks remained submerged and did not float back to the water surface. The particles in the oil-water interface (encapsulation) was observed to be tightly packed due to the combined effects of gravitational and capillary forces. Close up examination showed that some particles were pushed out forming staggered arrangements at the oil-water interface. The tightly arranged granular packing characteristics of the granular particles are different from those that occur with the nano scale or colloidal particles where gravitational forces are relatively less significant and electrostatic forces limit the ability of the particles to form such tightly packed arrangements.

The observed macro scale phenomenon can have applications in biological systems for transporting macro molecules in liquid state (as oil sacks) or particles as encapsulation; and in large scale aquatic environments for capturing and stabilizing the mobility of floating oils with granular particles.