There is no doubt that cancer is a devastating disease. However, restraining the cancerous cells from spreading throughout the body (invasion) will make it easier to control and possibly cure cancer. β-catenin is one of the proteins inside the cells of our body which when translocating into the nucleus, it presses the buttons required for cell invasion into the surrounding area through modulating the expression of certain genes that are responsible for the process of cell migration, invasion, and metastasis. 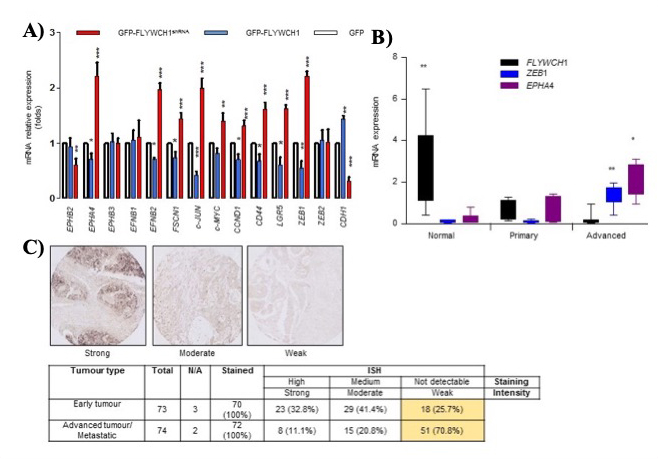 Fig. 1. Low FLYWCH1-mRNA expression significantly associates with advanced tumours. A) The mRNA expression of several tumorigenic and proinavsive β-catenin/TCF4 target genes in cells expressing either GFP-FLYWCH1 (blue) or GFP-FLYWCH1-shRNA (red) relative to the control cells expressing GFP (White). B) Correlation of the mRNA expression of FLYWCH1 to EPHA4 and ZEB1 in a cohort of thirty-three; normal, primary, and metastatic tumour tissues. C) photomicrographs of colorectal cancer-TMA specimens analyzed by ISH using a specific FLYWCH1 probe with strong (left), moderate (middle), and weak (right) expression. The lower panel shows a correlation between FLYWCH1 expression and tumour staging. Weak expression of FLYWCH1 is associated with the more advanced stage of a tumour. N/A: samples were not available on slides after staining and perhaps wiped off through the ISH process.

Here, we introduce a guardian molecule called FLYWCH1, who interacts with and opposes the oncogenic activity of nuclear β-catenin by selectively suppressing its transcriptional activity. For example; FLYWCH1 decreases the level of Wnt target genes associated with cell morphology and migration, such as ZEB1 and EPHA4, while increases genes that promote cell attachment such as E-cadherin. Importantly, this effect was reversed by knocking down FLYWCH1 expression using siRNA technology (Fig. 1A).

Also, there is a significant correlation between low level of FLYWCH1 and increased of ZEB1 and EPHA4 in normal versus advanced-stage tumours (Fig. 1B). Interestingly, a negative correlation between FLYWCH1 expression and tumour progression (70.8% vs. 25.7%, P ≤ 0.017; Fig. 1) in a series of early and advanced/metastatic patient’s colorectal cancer tumours was also observed (Figure 1C). These findings support the notion that FLYWCH1 may selectively modulate the transcriptional activity of Wnt/β-catenin signalling pathway, and its expression is necessary to prevent tumour metastasis.

Based on our findings we propose that in the absence of FLYWCH1, β-catenin binds to its long-term partner protein TCF4 and activate the genes that are required for tumour invasion through reducing cell attachment and enhancing cell migration (Fig. 2B). However, in the presence of FLYWCH1, β-catenin can no longer bind to TCF4 and fails to activate the genes that are required for cell motility and attachment resulting in impaired invasion and metastasis (Fig. 2A). 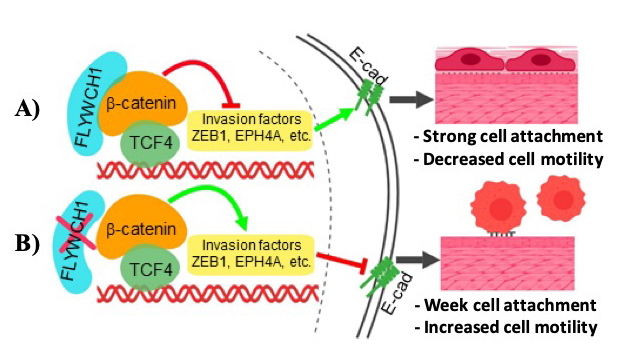 Fig. 2. Schematic representation of the regulatory role of FLYWCH1. A) In the presence of FLYWCH1, β-catenin can no longer bind to TCF4 and fails to activate the genes that are required for cell motility and attachment resulting in the impaired invasion. B) In the absence of FLYWCH1, β-catenin binds to TCF4 and activates genes that are required for tumour invasion through reducing cell attachment and enhancing cell migration.

This study, for the first time, characterizes and describes a possible anti-metastasis and tumour suppressive role of FLYWCH1 in the context of the Wnt/β-catenin signalling pathway. We believe that FLYWCH1 has the potential to be considered as a biomarker and therapeutic target against metastatic colorectal cancer in the future.