Gliomas and the microenvironment

Recently, the term “microenvironment” has been introduced to indicate all the cell types and molecular signaling that in tumors regulates transformation, growth, invasion, therapeutic resistance and defense from host immunity. In malignant gliomas, i.e., glioblastoma, the most malignant of gliomas, the cell component is represented by microglia/macrophages, reactive astrocytes, fibroblasts, pericytes, immune cells, beside tumor cells, whereas the molecular signaling can be either intrinsic or extrinsic. The microenvironment maximum expression points are the so-called “niches,” perivascular or peri-necrotic, where progression and regression mechanisms take place, mainly cell proliferation, angiogenesis for building new vessels, invasion and resistance to radio- and chemo-therapy. The niches are also the sites where tumor stem cells – the product of a tumor transformation of the primitive cells or normal neural stem cells, which during embryogenesis give origin to the entire nervous system – reside or are generated. 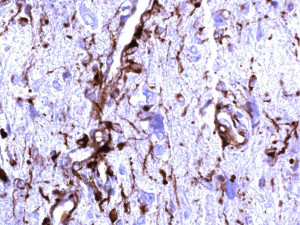 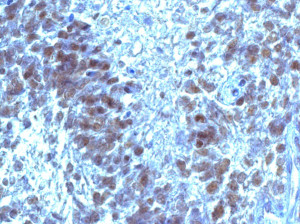 The microenvironment action is realized through either intrinsic pathways such as those of Wnt/β-catenin, BMI1, Nanog, Oct4 and c-Myc and extrinsic pathways such as those of EGFR, PTEN, PI3K/AKT, Bmp and LOH that regulate proliferation, angiogenesis and invasion and are in a strict relationship with the generation or maintenance of tumor stem cells. The origin of tumor stem cells is generally conceived to be realized either from the tumor transformation of normal neural stem cells or from dedifferentiation of adult normal astrocytes or tumor astrocytic cells or from oligodendroglial NG2+ precursors. However, many believe that the tumor stem cells do not represent a special cell type, but rather a functional status that can be acquired or lost. There would be a transition from tumor cells to tumor stem cells and viceversa, regulated by the microenvironment; one could speak of a conversion among cell statuses operated by it.