Epilepsy is one of the most common chronic neurologic disorders and affects all domains of life. About one third of people with epilepsy still have seizures despite antiepileptic drug treatment. Drug resistant epilepsy strongly impairs quality of life. For a proportion of patients with focal epilepsy resective neurosurgery is the treatment of choice with very good results. Most patients become seizure-free or obtain an important reduction of seizure frequency. The majority – also those who have not obtained seizure-freedom – are satisfied with the surgical treatment. The risk of major complications is low. At long-term (more than 5 years) more than 50% have been continuously seizure-free since surgery. Despite this many patients have had epilepsy for decades before they get referred for presurgical investigation. 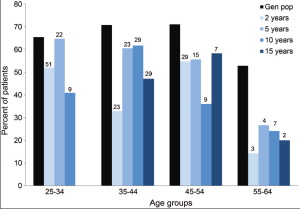 Less is known about long-term employment outcomes, especially at longer term after surgery. The current study has investigated long-term employment outcomes in a prospective, population-based cohort of 496 adults who had resective epilepsy surgery in Sweden 1995-2010. Patients were categorized according to pre-operative employment status (full-time employed, part-time employed, students or on benefits), and further into different seizure outcome groups (from seizure-free to no change in seizure frequency). Follow-up was done after 2, 5, 10 and 15 years. Those who had full-time employment before surgery and then became seizure-free had the most favorable employment outcome. Two, 5, 10 and 15 years after surgery, 79%, 79%, 57% and 47% still worked full-time. Among the patients who were on benefits before surgery and became seizure free one third had full-time employment at long-term follow-up. Students had results comparable to those with full-time employment before surgery. Many who did not become seizure-free could continue to work part-time long after surgery, with better results for patients with strongly reduced seizure frequency. Predictors for having employment post-operatively were having employment pre-operatively, good seizure outcome and younger age.

Employment in seizure-free patients was also compared to employment levels in the general population in Sweden. Employment was analyzed for four different age groups from 25 to 64 years of age (in decades), see figure. Although patients had lower employment levels than the general population, the differences were not that important: after 5 and 10 years, 36-65% of the seizure-free patients between 25 and 54 worked full-time, decreasing to 24-27% for patients aged 55 to 64 years. In the general population, 65% to 71% worked full-time up to age 54, thereafter only 53%. The reasons for the diminishing employment in seizure-free patients over time are not clear, but it must be taken into consideration that these patients have had severe, drug-resistant epilepsy for many decades and some have co-morbidities which might impair their level of function despite seizure freedom.

Late referral for epilepsy surgery is a problem for several reasons. Patients suffer many years from their severe epilepsy disorder sometimes with ensuing stigma, and some become cognitively impaired over time. Also, since younger age was shown in this study to be a predictor for better employment outcome, it seems plausible that earlier referral for surgery could contribute to better employment outcome in the long term.