Auditory signals, including human speech, are characterized by many features, one important being sound frequency, which is perceived as pitch. In normal hearing people, the cochlea in the inner ear translates different sound frequencies into neural activation at different cochlear locations, establishing a place-frequency code. Unfortunately, ~460 million people worldwide suffer from hearing impairment, mainly caused by damage or loss of sensory cells in the cochlea. In these patients, the place-frequency code can be utilized for artificial hearing by cochlear implants (eCIs; Fig. 1A), which use a few electrodes placed at different locations in the cochlea: By electrically activating neurons of the auditory nerve (which are located just one station behind the damaged/lost sensory cells) at different electrodes, the patient perceives a sound that roughly matches the frequency which is naturally coded at this respective cochlear location. CIs nowadays provide more than half a million patients with an artificial sense of hearing, and even enable speech comprehension in most of these patients. However, despite being considered the most successful neuroprothesis, CIs are still limited in frequency resolution, which normally prevents patients from speech understanding in noise or music appreciation. This limitation originates from the spread of electric current within the cochlea, which naturally is filled by electrically conductive fluids: The generated electric field covers large parts of the cochlea, resulting in activation of many neurons, and thus limiting the precision by which electrical hearing can make use of the place-frequency code. This major bottleneck of eCIs might be overcome by optical stimulation of the auditory nerve, since light can be focused much more conveniently, and thus might activate cochlear neurons with higher spatial precision, resulting in improved frequency resolution (Fig. 1B). However, since the auditory nerve is naturally not responsive to light, it first needs to be modified by using optogenetic tools: viral gene transfer to the inner ear allows the introduction of light-sensitive ion channels into the auditory nerve, rendering it responsive to light. 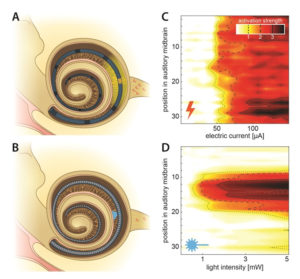 Of course, a long way remains before considering clinical translation of this technology. Nonewithstanding, the demonstrated increase in frequency resolution of optical over electrical auditory nerve stimulation raises hope that future optical cochlear implants might overcome the bottlenecks of nowadays electrical cochlear implants, and provide the patient with more natural hearing restoration.