Recent advances in synthesizing noble metal nanoclusters (NCs), in particular Au and Ag NCs, offer a promising class of fluorescent probes for constructing optical sensors, which are expected to improve their features in terms of simplicity, photostability and biocompatibility. Until now, various noble metal NCs have extensively exploited in chemical detection based on analyte-induced fluorescence quenching. The earlier successful examples were demonstrated to detect Hg2+ and Cu2+ through the aggregation of Au NCs induced by metal ions, or the high-affinity metallophilic interaction with surface Au+ of Au NCs. The noble metal NCs were also applied in chemical detection of inorganic anions (CN–, NO2–), hydrogen peroxide (H2O2), and proteins via fluorescence quenching. However, the noble metal NCs have not been successfully used for sensitive and selective detection of herbicides, which have been becoming one of major concerns in our daily life over the past decade due to their contamination of drinking water and agricultural products. This is because the noble metal NCs were not fluorescently responsive to most of herbicides, and thus it is of a great challenge in applying them to achieve the sensitive detection of herbicides. 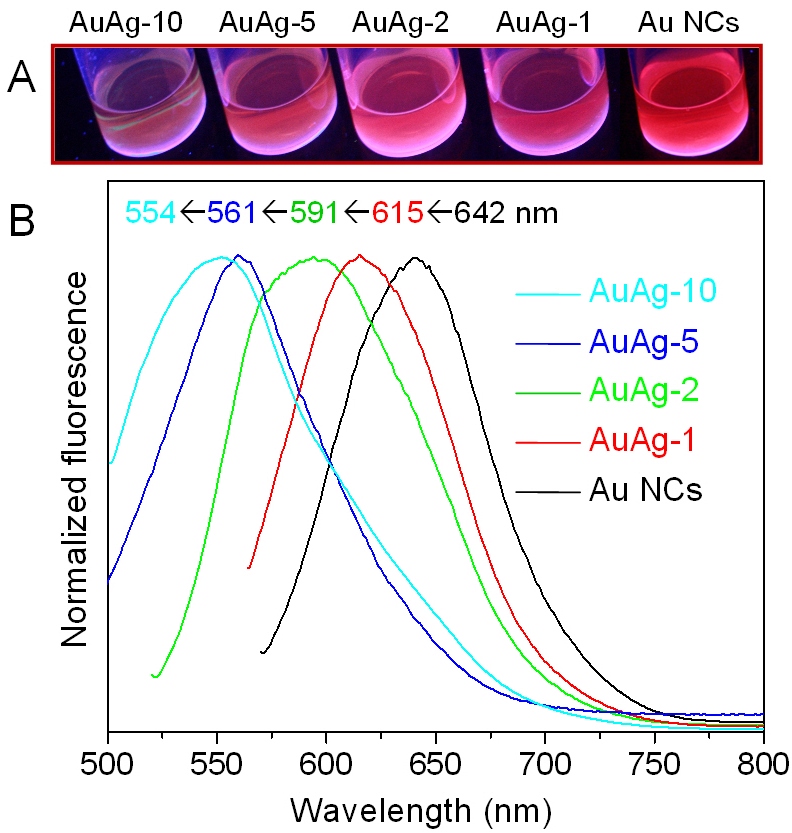 Fig. 1. Increased incorporation of Ag in AuAg NCs and their tunable fluorescence. (A) Fluorescence images of AuAg NCs prepared with the use of 0, 1, 2, 5 and 10 mM Ag+ while maintaining the concentration of Au3+ at 5 mM, which are labelled as Au NCs, AuAg-1, AuAg-2, AuAg-5 and AuAg-10 NCs, respectively. (B) Normalized fluorescence spectra of AuAg NCs with different content of Ag.

To reveal the fluorescence red-shift mechanism, the structure of the AuAg NCs was carefully determined as Ag28Au10 NCs (inset of Fig. 2B) through a series of characterizations including energy-dispersive X-ray spectroscopy, mass spectroscopy and X-ray photoelectron spectroscopy, together with density functional theory (DFT) simulations. When adding an excessive amount of H2O2, the thiolate groups on the surface of AuAg-10 NCs were oxidized into disulfides. Lack of protection from thiolate groups, Au+ and Ag+ from the surface of AuAg-10 NCs were released into solution. The Ag0 atoms in core of AuAg-10 NCs are then exposed and oxidized to Ag+ subsequently. In the presence of Ag+, the released Au+ ions reacted with BSA to generate Au NCs, exhibiting an obvious fluorescence red-shift.

Furthermore, the Ag28Au10 NCs were also used for the sensitive and selective detection of herbicide propazine via fluorescence enhancement (Fig. 2B). Through simulating the binding of different analytes on surface of Ag28Au10 NCs, the sensing mechanism was revealed to result from the strong coordination of propazine on the surface Ag+ ions. Remarkably, the detection limit for propazine (0.1 nM) was far below the health value established by U.S. Environmental Protection Agency and the sensitive detection was not achieved by using AuAg NCs with low level incorporation of Ag or their individual metal NCs. The facile synthetic approach to high level incorporation of Ag in Au NCs opens a new window to explore novel sensory metal NCs and apply them for the convenient detection of environmentally toxic substances.