Holding the last line of defence against malaria

Malaria contributed to the deaths of almost half a million people worldwide in 2015. This disease mainly affects people in the developing countries and imposes a serious health and financial burden. Artemisinin (ART)-based combination therapy is the current last line of defence against malaria. This drug class has saved millions of lives over the past decade and Youyou Tu won the 2015 Nobel prize in Physiology or Medicine for her part in its discovery. Worryingly, ART resistance has emerged and spread to six Southeast Asian countries, jeopardizing global malaria control and elimination. It would be devastating if ART resistance spread to African countries which account for more than 80% of malaria deaths. Understanding and overcoming ART resistance is a critical challenge that must be tackled. 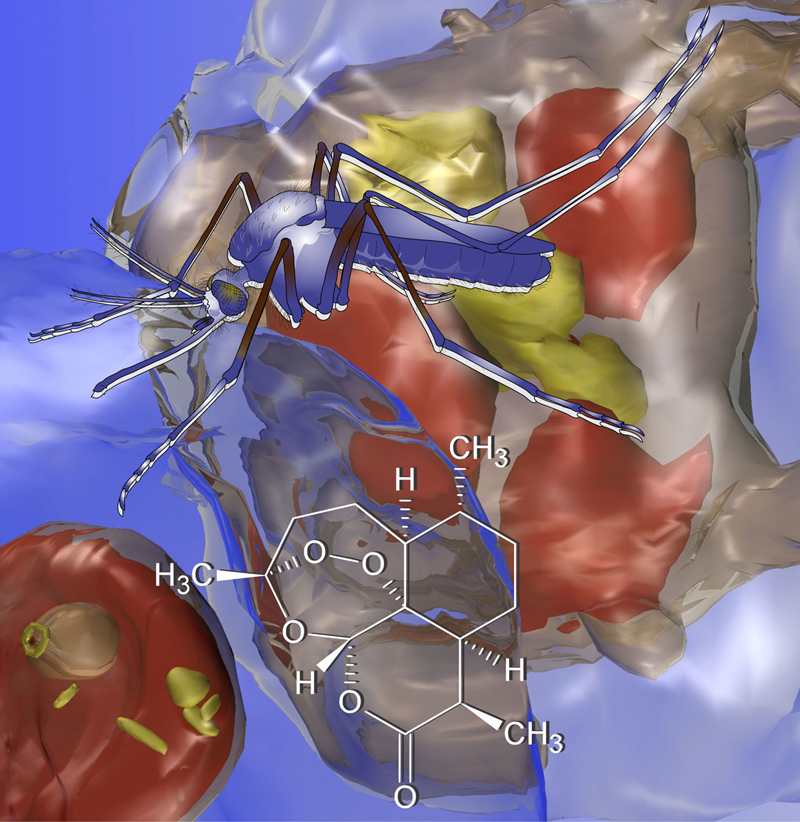 Fig. 1. Malaria parasites are transmitted by Anopheles mosquitoes. Artemisinin kills parasites when it is activated by heme, which is produced when the parasite digests the contents of its host’s red blood cells. Electron microscopy image of malaria parasites generated by Dr Eric Hanssen, Advanced Microscopy Facility, Bio21 Institute, University of Melbourne.

A molecular marker of ART resistance has been identified, namely mutations in the K13 propeller gene. Heme-activated ART is thought to kill malaria parasites by indiscriminately targeting a broad spectrum of parasite proteins with various functional roles. Our studies revealed that parasites slow down their growth upon ART treatment, indicating the initiation of a cellular stress response. Parasite killing occurs when the cellular stress response is overwhelmed. Protein ubiquitination and subsequent degradation are important processes involved in the cellular stress response. We found that an elevated level of protein ubiquitination was evident after ART treatment of K13 wildtype parasites. By contrast ART resistant parasites appear to have an improved system for protein repair and can withstand the ART-induced cellular damage for longer. It is still unclear how the mutations in K13 gene modulate the parasite response to ARTs. It has been postulated that K13 may function in a manner similar to the mammalian ortholog Keap1, which regulates expression of antioxidant stress response genes.

Strategies to restore the efficacy of ART-based therapy are urgently needed. Our research offers two potential means of overcoming ART resistance. Firstly, our detailed analysis of ART sensitive and resistant parasites demonstrated that an extending the number of days over which ART treatment was applied would more effectively kill resistant parasites. The enhanced stress response of the resistant parasites would eventually be overwhelmed with prolonged ART exposure, leading to parasite death. Hence we proposed that a 4-day treatment regimen should be implemented in the area with a high prevalence of K13 mutants. Secondly, the ubiquitin-proteasome system plays an important role in cellular stress response by removing damaged and unfolded proteins. We found that clinically used proteasome inhibitors strongly synergize ART activity, especially in ART resistant parasites. This treatment causes the accumulation of ART-damaged proteins and elevated cellular stress. Hence, Plasmodium proteasome represents a potential drug target that could be used to defeat ART resistant parasites by disabling their improved defence system.

Resistance has compromised the efficacy of every antimalarial drug currently or previously in use. For most of these drugs, it did not take long for resistance to spread to all the malaria endemic regions. Hence, ART resistance must be well-monitored and contained. With the current high level global effort, it is very encouraging that annual malaria cases have reduced by almost 40% since 2000. If we can extend the useful life of ART-based combination therapies as well as developing new antimalarial drugs, malaria eradiation may be closer to us than ever before.