How are thylakoid membranes shaped and maintained?

An oxygen-rich atmosphere was one of the most important prerequisites for the evolution of complex life on earth. Ancestors of modern-days cyanobacteria floated the earth’s atmosphere with this gas roughly 2.8 billion years ago. To convert carbon dioxide into oxygen, nature invented the process of photosynthesis in primordial cyanobacteria, and the oxygen-evolving ability was passed on to plants, when primordial cyanobacteria were engulfed by plant cell progenitors, resulting in the evolution of modern-days chloroplasts. 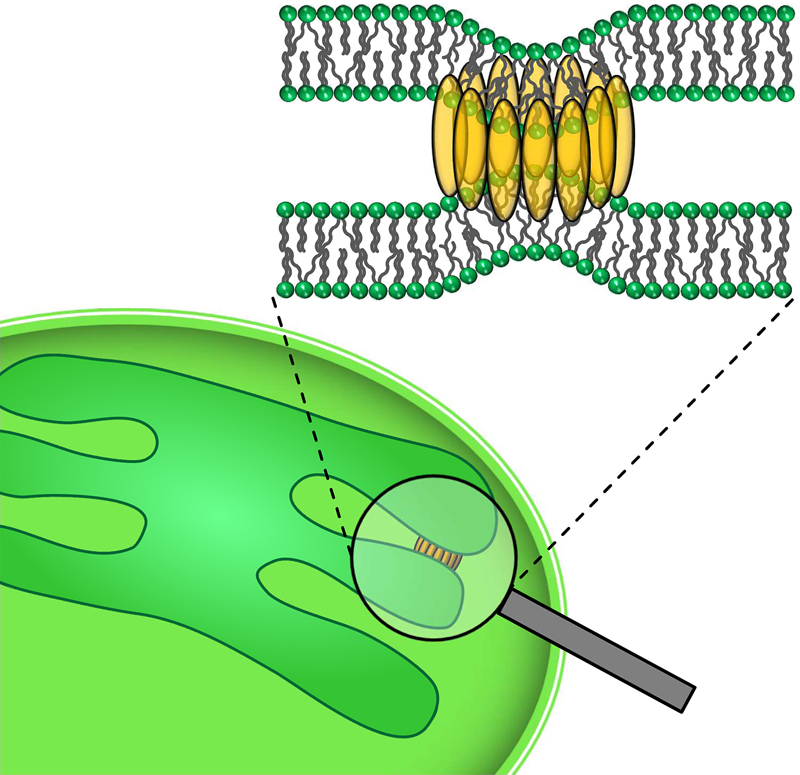 A major part of photosynthesis, the photosynthetic light reaction, takes place in a defined and complex internal membrane system in cyanobacteria and chloroplasts, the thylakoid membranes (TMs). TMs have a rather unique lipid composition, with the galactolipid MGDG being the major TM lipid species. Surprisingly, MGDG is a non-bilayer forming lipid, i.e. it does not like to form regular membranes.

Although the structure and function of TMs are well described in textbooks, it still remains mysterious how this membrane system is built and maintained. In the last twenty years, the involvement of a protein called the inner membrane-associated protein of 30 kDa (IM30) became evident, albeit the precise physiological function of IM30 was unclear for a long time.

The mainly α-helical IM30 monomers have a strong propensity to homo-oligomerize into huge ring complexes with masses exceeding 2 MDa. However, the physiological function of these ring structures for the IM30 in vivo activity still needs to be demonstrated. Importantly, while not having any transmembrane domains, IM30 rings were found to be peripherally membrane attached, and the membrane interaction of IM30 appears to be important during TM biogenesis. IM30 binds to negatively charged TM lipids, resulting in an increased membrane lipid order. Likely, IM30 has originally evolved by gene duplication from the bacterial phage shock protein A (PspA) in an early cyanobacterium. The ability to order membrane structures might be shared with the IM30-ancestor PspA, which is known to be able to stabilize and/or repair proton-leaking membranes in E. coli.

However, in the presence of Mg2+, a cation highly abundant in plant chloroplasts, the activity of IM30 changes dramatically: In presence of Mg2+, IM30 can trigger membrane fusion processes, and membrane fusion involves initial membrane destabilization. Based on results published by us and others in the previous years, in the current article we propose a model for this novel fusion mechanism: IM30 binds as an oligomeric ring to TMs and generates a MGDG-enriched lipid area in the center of an IM30 ring. The MGDG-enriched membrane is considerably destabilized and tends to fuse spontaneously with an adjacent membrane. This event potentially involves IM30 ring dissociation.

In summary, IM30 appears to be a key player involved in the genesis of TMs in chloroplasts and cyanobacteria, and recent analyses are a starting point for the discovery of a novel fusion mechanism. However, many steps of the proposed fusion process are currently highly speculative, and the accuracy of this model has to be proven in future experiments.