How does histamine make it hard to breathe?

Histamine is a chemical substance that can be released in the lungs to cause narrowing of the bronchial tubes and difficulty breathing. Airway smooth muscle cells in the bronchioles (small airways) of the lung can contract or relax to control the extent of airway opening and the resistance to air flow during breathing. Histamine and other bronchoconstrictor stimuli exert their actions by causing an increase in calcium ion concentration in the airway smooth muscle cells, which stimulates their contraction and hence promotes constriction of the airways. Recent research has suggested that Kv7 potassium channels (proteins that form pores which allow potassium ions to move across the cell membrane) are important regulators of airway smooth muscle cell calcium concentration and contraction. The outward flux of positively charged potassium ions through the Kv7 channel pore is manifested as an electrical current that establishes a negative resting membrane voltage and thereby opposes the opening of L-type voltage-sensitive calcium channels (VSCCs), which are pores that, when open, allow calcium ions to flow into the cells for stimulation of airway smooth muscle contraction. 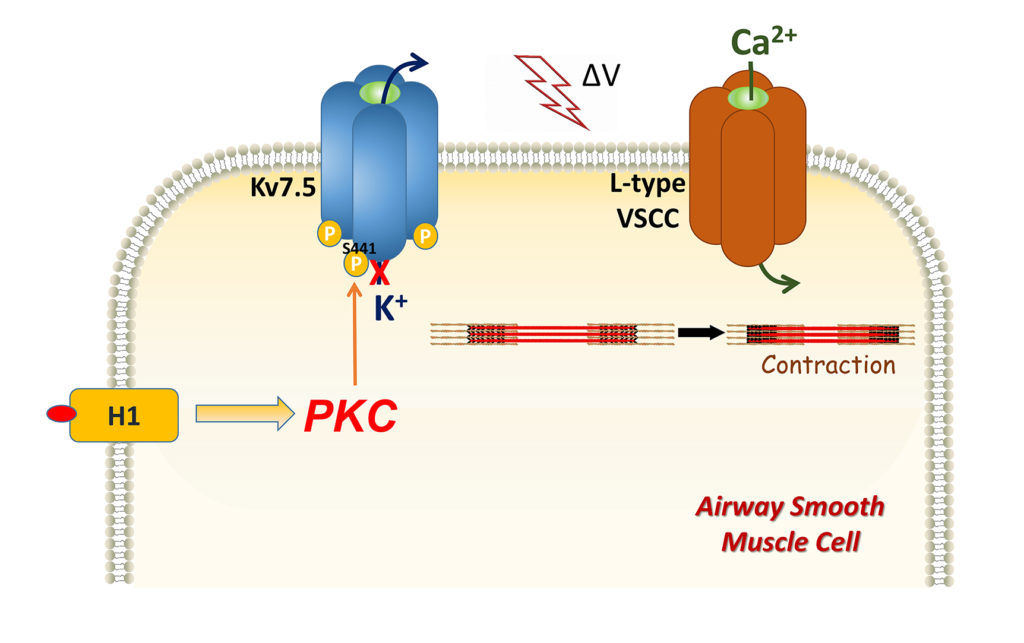 Previous studies from our laboratory revealed that Kv7 channels in airway smooth muscle cells are inhibited upon exposure to bronchoconstrictor substances, including histamine. In human airways, this inhibition of Kv7 channels was sufficient to induce bronchiolar constriction. However, the mechanism by which Kv7 currents are inhibited by bronchoconstrictor substances had yet to be elucidated. In numerous studies from other research groups, protein kinase C (PKC), a cellular enzyme that catalyzes the transfer of phosphate onto specific substrate proteins (a process called phosphorylation), had been implicated as a mediator of bronchoconstrictor actions, though the relevant substrates for PKC-dependent protein phosphorylation were not clearly established. In this research article by Haick and co-workers, Kv7 channel activity was measured in cultured smooth muscle cells from human trachea (HTSMCs). Consistent with earlier research findings, potassium currents through these channels were inhibited upon treatment with histamine; this inhibition of Kv7 currents was associated with a positive change in membrane voltage and an increase in calcium ion concentration in the HTSMCs. The latter response was inhibited by verapamil, a drug that blocks L-type VSCCs. Kv7.5 (a subtype of Kv7 channels) was found in human airway smooth muscle and its phosphorylation was increased in response to histamine, methacholine (another bronchoconstrictor substance) or phorbol-12-myristate-13-acetate (a drug that directly activates PKC). By recording the activity (potassium currents) of Kv7.5 channels in cultured HTSMCs, it was determined that the suppression of Kv7.5 channel activity by histamine was dependent on PKC activation—it was prevented by a drug that inhibits PKC or by removing PKCα (a specific kind of PKC) from the HTSMCs. Phosphorylation of a specific serine residue (S441, an amino acid that makes up part of the channel structure) on Kv7.5 was found to be essential for the inhibitory effects of histamine on Kv7.5 currents. These findings provide the first evidence linking PKC activation to suppression of Kv7 currents, a change in membrane voltage, and influx of calcium via L-type VSCCs as a mechanism for histamine-induced bronchoconstriction.

In summary, the study provides insight into the mechanism by which bronchoconstrictors act to inhibit Kv7 potassium currents in human airway smooth muscle cells. The findings suggest that activation of PKCα by histamine results in Kv7.5 channel phosphorylation, and consequently inhibits Kv7.5 channel activity. This research fills a gap in understanding of the ionic mechanisms whereby PKC activation, in response to bronchoconstrictor stimuli such as histamine, can stimulate airway smooth muscle cell contraction, a fundamental mechanism in respiratory physiology and disease.