How does the antioxidant biliverdin work?

Antioxidants as food supplements are all the rage. Antioxidants include vitamins C and E and the compound family of the flavonoids, the strongly dark-blue or red-colored compounds found in fruits, such as blueberries or blackberries, or in red wine. Antioxidants protect the body from damages caused by natural (or perhaps not so natural – think of sun bathing or smoking) processes that are caused by harmful molecules called free radicals or other species, cumulatively referred to as reactive oxygen species (ROS). Many believe that the oxidative damage by radicals and ROS is a factor in blood vessel diseases, macular degeneration, and other conditions. 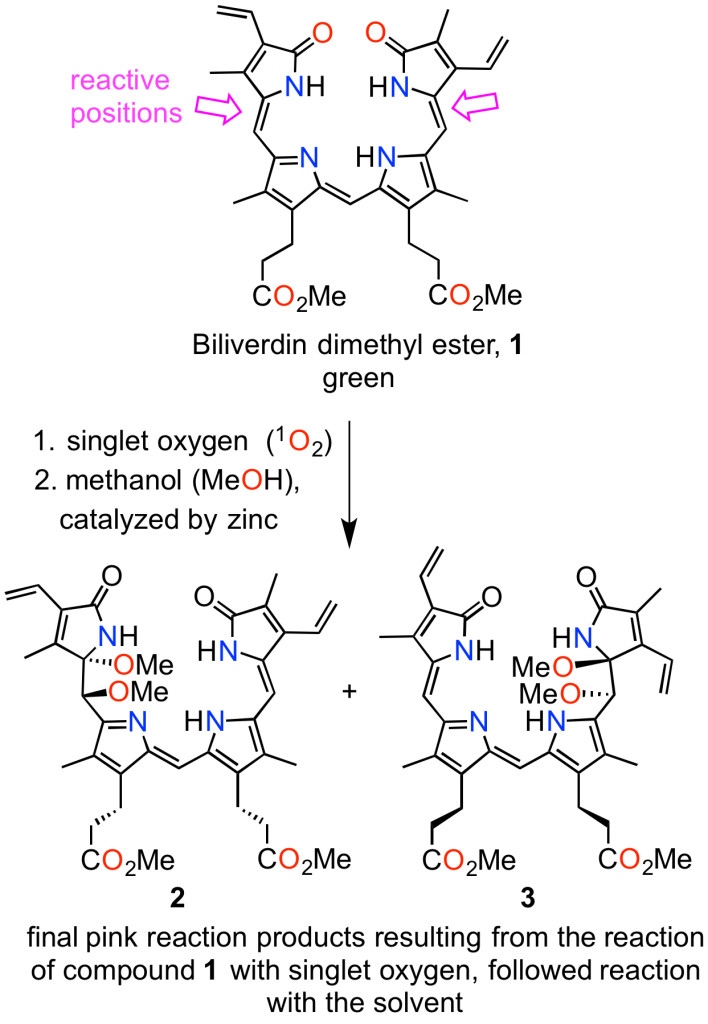 Our bodies also produce antioxidant compounds. One of them is biliverdin (shown in figure as the dimethyl ester, 1). It is the green break-down product from heme, the red, iron-bearing pigment in hemoglobin, the major constituent of our red blood cells. We all have seen biliverdin when watching a bruise go from red (blood) to green (biliverdin) to yellow (bilirubin), as the heme leaked into tissue as a result of the punch is degraded and resorbed.

The concentration of biliverdin in our tissue is normally low and tightly controlled. Other species have a much higher tolerance for biliverdin. Frog eggs, for example, derive their color from biliverdin, some fish have literally green bones and the tobacco hornworm green blood because of the presence of larger quantities of biliverdin. Evidence is mounting that biliverdin possesses antioxidant properties in mammals, but its mode of action is unclear. Singlet oxygen in particular is a well-recognized and common ROS that was shown to be quenched (neutralized) by biliverdin. However, the molecular-level mechanism of this antioxidant activity of biliverdin was unkown. This is where our work set in.

We isolated biliverdin, as its dimethyl ester 1, from the dark green eggshells from emus, a convenient source of biliverdin. It is present in the eggshells as a dye to hide the egg lying on the ground in a nest lined with leaves from predation. We attempted to study the interaction of biliverdin with zinc salts. By accident, however, we also generated singlet-oxygen because we failed to remove an impurity that we isolated from the eggshells together with the biliverdin. This impurity, protoporphyrin IX (the biochemical precursor to biliverdin) is well-known to convert oxygen in the air to singlet oxygen upon irradiation with light (the light in a normal room is enough). The singlet oxygen thus incidentally generated was taken up by the biliverdin and a cascade of reaction took place involving the zinc and the solvent. As a result, we observed the formation of two new compounds, 2 and 3. A number of analytical techniques hinted at the portions of the biliverdin molecule that were altered by the reactions. We were also able to back-track the origin of the reaction to a singlet oxygen attack. Single crystal X-ray crystallography allowed us to look at the molecule and unambiguously confirm its structure, and its formation could be rationalized and experimentally proven. Singlet oxygen specifically added out of the 13 double bonds present in the molecule to one of two very similar double bonds, thereby deactivating singlet oxygen and preventing it from causing damage elsewhere.

We thus were firstly able to present structural evidence for a specific reaction mechanism by which biliverdin can act as an antioxidant with respect to singlet oxygen. The work is important because it increases our molecular-level understanding of the action of biliverdin as an antioxidant. Future work will have to show if this reaction in the test tube also possesses biological relevance.