How will China’s development of wind power contribute to global warming?

As a non-fossil technology, wind power has an enormous advantage over coal because of its role in climate change mitigation. Despite wind power may not be a pure zero-emission technology from the perspective of life cycle emissions, its carbon content (per kWh) is only 2.2% of the emissions generated by coal. As a consequence, the GHGs reduction associated with the substitution of coal with wind power yields enormous environmental benefits. 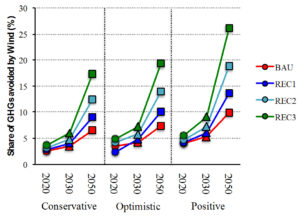 Fig. 1. Contributions of wind power to GHGs reduction across a wide range of GHG controls and wind development scenarios.

This is particularly true for China, which simultaneously faces a high increase in energy demand and the need for significant emission reductions. In addition to adjust its energy structure and promote industrial upgrading, accelerate the penetration and use of renewables, such as wind power, is of great importance for China to peak its carbon emissions in 2030 and double the amount of non-fossil energy in less than 15 years. Then, what is the role of wind energy development in controlling China’s GHG emissions and global warming? How are the environmental benefits arising from substitution of wind power for coal-fired electricity, given targeted emission budgets?

By considering full spectrum (FP) and life cycle (LC) emissions, we have developed a Chinese energy-economy-environmental (3E) integrated framework, coupling with a simple emission-warming response model. It is founded that the contribution to emission reduction due to electricity replacement in 2050 is less than 10% in the absence of emission constraints, even if the wind energy market expands positively (Fig. 1). Given the stringent GHGs emission budget, wind-for-coal substitution will be responsible for reductions of up to 26.1%.

China’s responsibility for the global temperature rise ranges from 0.19°C to 0.37°C in 2050, corresponding to the lower bound and upper bound of the LC emission factors in the BAU case, respectively; as a result, China will contribute up to 21.76% of the global temperature rise by 2050, given the 2°C warming limit. Our results reveal that the roles of wind-for-coal substitution in radiative force and global warming are relatively limited, as demonstrated in Fig. 2-I, Fig. 2-II, and Fig. 3-III. A positive wind-for-coal substitution will lead the average temperature decrease to 0.202°C, in the presence of stringent emission constrains, which is equivalent to reduce 0.8% of the global warming rise, given the 2°C warming threshold (Fig. 2). 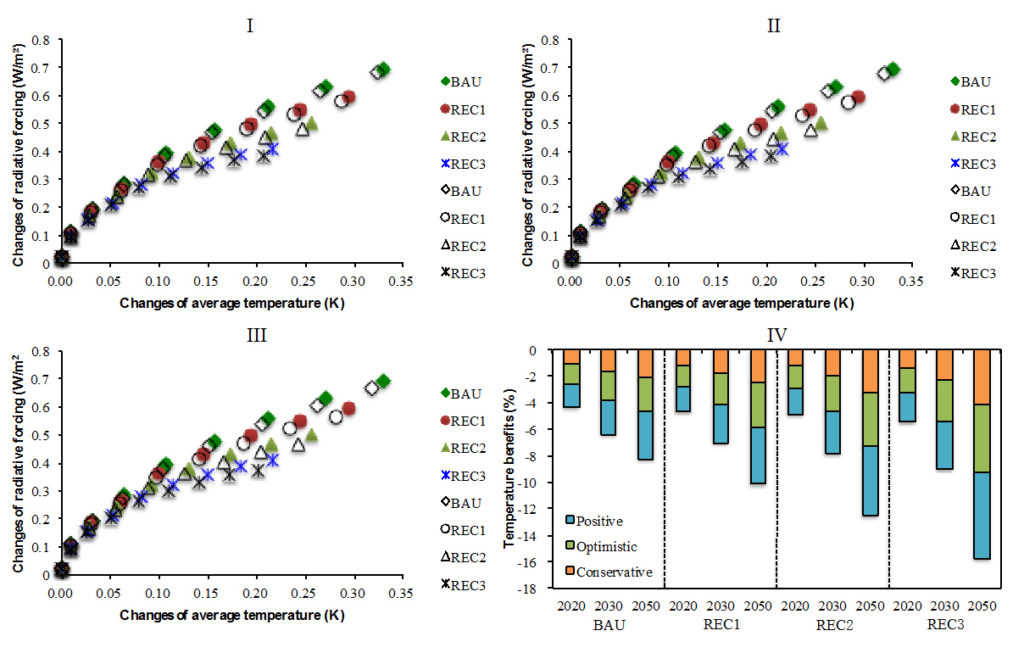 Fig. 2. Impacts of wind-for-coal substitution and emission controls on temperature-rise. (Subfigures I, II and III portray the changes of radiative forcing and average surface temperature arising from China’s GHG emissions, signs with and without color represent the results without and with wind-for-coal substitution, respectively; and the associated contribution of power replacement are shown in Subfigure IV).

In sum, the benefits for emission reduction resulting from wind-for-coal substitution increase with the stringency of emission control, in despite of a lower overall level; still, it leads China to peak its emissions 1 or 2 years ahead of the no power replacement case. Besides, the substitution of wind-generated electricity for coal-fired power plays a minor role in ameliorating global warming, and the associated environmental benefits will not be significant until the second half of this century. There is no simple ‘silver bullet’ that can easily meet the challenge of global warming, and a narrow focus on wind power penetration and substitution is insufficient to cope with climate change; developing a portfolio of renewables is, therefore, strictly required.