Sex categories – whether one has female or male genitalia – are fundamental for reproduction. They are also one of the most important categories that shape the social world. No surprise then that scientists and the general public alike often assume that the sex categories penetrate beyond the genitalia to shape how people think, feel, and behave, assuming that there are female and male ‘natures’ subserved by a ‘female brain’ and a ‘male brain’, respectively. Differences between females and males in brain and behavior are often taken as evidence of this dimorphic view. 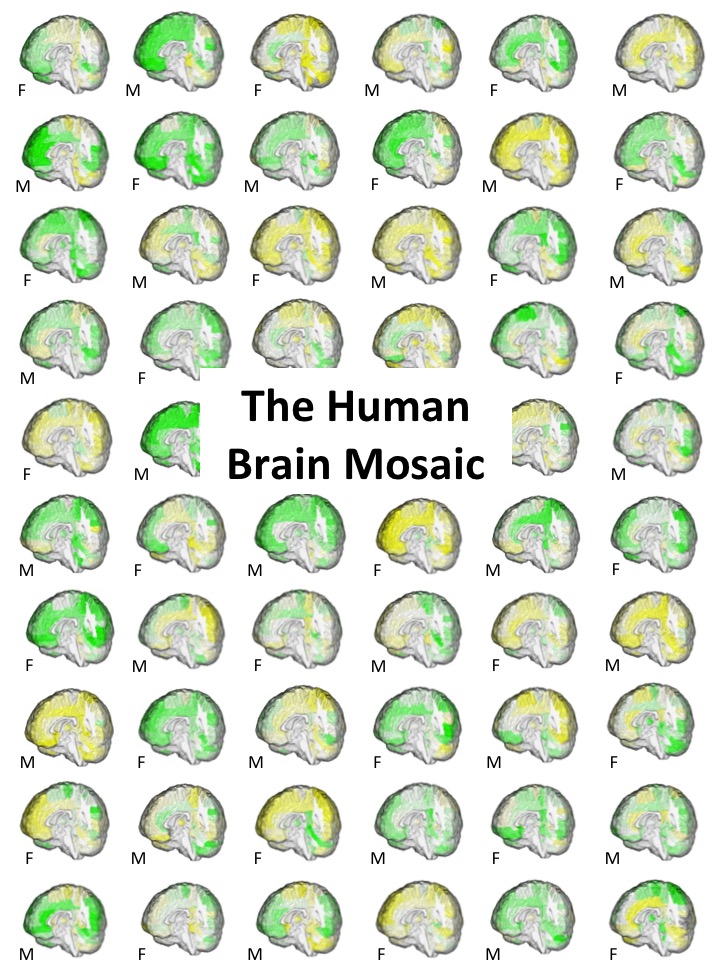 The heterogeneity of the human brain and the huge overlap between the forms that brains of females (F) and brains of males (M) can take is evident in these images, which present the volume (large [green] – small [yellow]) of brain regions in 56 adults. All brains were normalized using the Montreal Neurological Institute template.

Our study was the first to test whether differences between females and males in the brain ‘add up’ to create two distinct types of brains, ‘female brains’ and ‘male brains’. The rational for our study was derived from animal studies demonstrating that in contrast to sex effects on genital organs, sex effects on brain features may be opposite under different environmental conditions. That is, what is typical in one sex category (e.g., females) under some conditions may be typical in the other sex category under other conditions. As a result, brains are expected to be composed of both features more common in males compared to females and features more common in females compared to males; a situation which rarely occurs in genitalia. When it does occur, the genitalia are classified as ‘intersex’ and not as ‘male’ or ‘female’. Our analysis was designed to assess how common this ‘mixture’ of features is in the human brain.

We corroborated our findings by a similar analysis of personality traits, attitudes, interests, and behaviors of over 5500 individuals, which revealed that internal consistency is extremely rare whereas substantial variability is very common.

Together, our results demonstrate that regardless of the cause of observed sex/gender differences in brain and behavior (nature or nurture), humans and human brains do not belong to one of two distinct types. It is time to let go of binary thinking and celebrate the fact that there are many different ways to be male, to be female, to be human.