Hyper IgM syndrome in North America: a rare disease of a critical step in the immune response pathway

Hyper IgM (HIGM) syndromes are a group of rare genetic disorders leading to ineffective immune responses. People with this immune defect are usually diagnosed in early childhood due to frequent infections. Most of these are common but others are similar to “opportunistic” infections found in HIV. The cause of the immune defect is a lack of sufficient and effective antibody production from a type of white blood cell called the B cell. When confronted with an infection or a vaccine, B cells produce a first draft of an antibody, a protein in the serum called IgM.  When B cells then come in contact with other lymphocytes called T cells, these cells can mature into a number of antibody secreting cells. HIGM syndromes are caused by defects in these B and T cell interactions. Without this kind of communication, neither T nor B cells can reach their maximal immune responses. Also, B cells are detained in their immature IgM form and not able to respond efficiently. In addition, vaccines or infection do not trigger any antibody memory, so subsequent infections are not prevented. 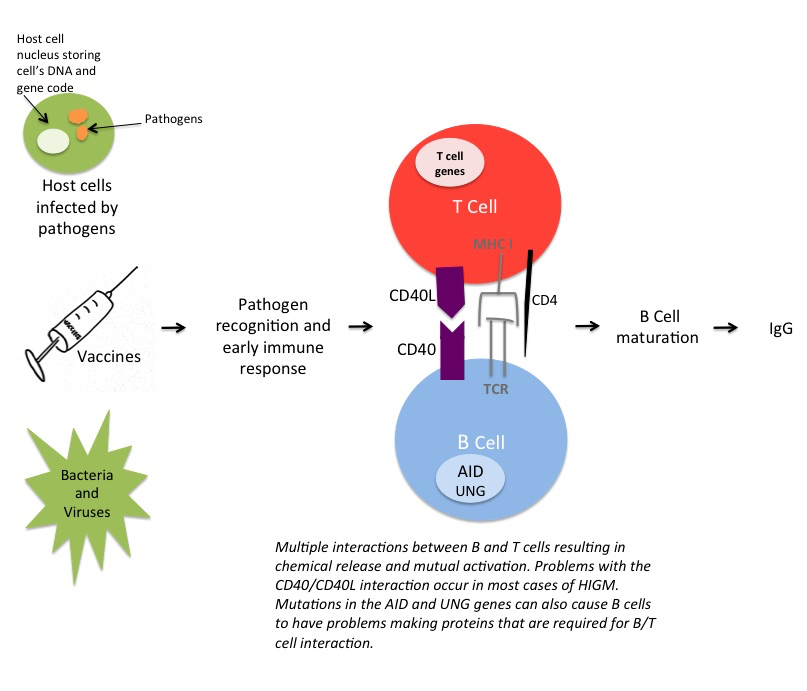 Stem cell or bone marrow transplant is the only known cure for HIGM, but it poses risks for both infections, and failure of the graft. Since disease syndromes are rare, very few physicians ever see HIGM patients. Moreover, the patient population is too small to show trends that can be used to develop a more rigorous standard of care for the kinds of complications that may develop. Since HIGM arises from the dysfunction of a key immune system pathway, researching HIGM can help us better understand an essential step in the human immune response to pathogens while offering new insights into the development and treatment of the disorder.

In this study, we used the United States Immune Deficiency (USIDNET) Registry, supported by the Immune Deficiently Foundation, to characterize the presentation, long-term manifestations, and treatment practices in HIGM. The database contained clinical information gathered from 1992-2015 on 145 patients aged 2 months to 62 years. It also contained specific genetic mutations for 84 patients; these were compiled and organized together with patients’ clinical conditions. Of this group, 91% reported infections- pulmonary, ear, and sinus infections were the most common. 42% had Pneumocystis jirovecii pneumonia, an opportunistic fungal infection; 6% had Cryptosporidium, a parasite that can cause severe diarrhea and/or failure of the liver and gallbladder. Cryptosporidium comes from contaminated water sources, is very difficult to treat, and was previously reported at much higher rates in European HIGM reports. The lower infection rate in this study may be due to reduced exposure to contaminated water in this geographic zone. 41% of patients in the registry had experienced low numbers of neutrophils (a first-line immune cell), also common in HIGM. 78% experienced additional non-infectious complications: chronic diarrhea (in 22), mouth ulcers (in 28), and cancers (in 8) of the colon, adrenal glands, liver, pancreas, ovaries, and blood. Thirteen patients had bone marrow transplants; three required liver transplants. Most subjects received immunoglobulin replacement therapy. More than half received continuous preventive antibiotics. Thirteen were known to have died in the interval (median age = 14, range = 1-39 years). Reported causes of death included pneumonia, liver complications (two after transplant), and central nervous system infection by an opportunistic pathogen. Prior studies from about 20 years ago showed higher and earlier mortality. This is the largest HIGM dataset published to date.