One exciting frontier in biofuel research is boosting production yields. Biofuels are produced using biological processes, usually from agricultural raw materials such as sugar, starch or oil. Currently the biofuel industry is dominated by ethanol production, but butanol is an ideal biofuel because it stores more energy per litre, is more easily separated from water, is less corrosive to pipelines and can be blended with petrol at a higher concentration without damaging vehicle engines. 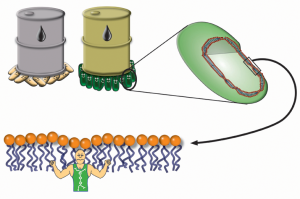 Fig. 1. COE1-5C locks the membrane molecules into higher stability so that the microbes can be more tolerant of butanol.

However, despite its vast potential, the biological production of butanol is facing technical limitations. Microbes that produce butanol by fermentation are killed as the butanol titre rises to only about 2% by volume, which means that a costly distillation process is needed to concentrate the fuel for practical use. The microbes die because their cell membranes are disrupted by butanol, so various strategies have tried to increase butanol tolerance by promoting greater membrane stability. This can be achieved by engineering butanol-tolerance pathway genes into these microbes, but such genetic approaches may result in unpredictable and undesirable effects.

First, the researchers simulated microbial membrane disruption by butanol using computer models. They evaluated four different OPV COEs molecules for their ability to increase the rigidity of the membrane. All four of them made the membrane more stiff, but a five-ringed molecule called 1,4-bis(4“-{N,N-bis[6”“-(N,N,N-trimethylammonium)hexyl]amino}-styryl)-1,4-distyrylbenzene tetraiodide (COE1-5C) showed the greatest effect. In addition, COE1-5C was encouraging as a candidate because of its low toxicity compared to other MIMs.

Fig. 2. Simulating the stabilising effect of different membrane insertion molecules (MIMs) over time at 0, 50, 100 and 200 nanoseconds. A is treated with COE1-5C, B with DSSN+. Butanol molecules are illustrated in red, MIMs in blue, water in gray and cell membrane molecules in green.

Finally, they tested the effect of COE1-5C on intact E. coli K12 cells by employing a technique that measures the integrity of cell membranes using an electrical potential. When butanol was added to the E. coli cells, membrane potential was increasingly disrupted as butanol concentration increased, as was expected. When the cells were treated with COE1-5C however, the ability of butanol to disrupt membrane potential was much reduced. This experiment provided evidence that butanol tolerance conferred by COE1-5C is a membrane-based phenomenon.

In conclusion, the researchers report that this is the first study to propose chemical modifications of the microbial membrane to achieve biotechnologically superior microbes. Specific results from this study will help overcome the current limitations in the biological production of butanol, while the chemical modification approach offers great scope for future development and serves as a strong alternative to genetic approaches to microbial strain improvement.