It has long been known that the brain abundantly expresses insulin receptors in all its major areas, indicating that this vital hormone controlling general glucose metabolism is important for brain function. However, mechanisms of neuro-vascular coupling at the blood-brain barrier (BBB) whereby active brain regions locally increase glucose and oxygen uptake are not considered to involve insulin under physiological circumstances. In other words, the brain has been considered the only organ in the body that is not dependent on insulin to modulate its glucose handling. Working with in vitro cultures of cells forming the BBB we found that insulin does modulate brain glucose metabolism by acting onto astrocytes, a cell type recently recognized to be a main player in brain glucose uptake. The reason the active role of insulin in brain glucose physiology was overlooked for so many years probably strives in that insulin acts  in concert with insulin-like growth factor I (IGF-I), a closely related hormone that share many biological functions with insulin. They are so similar that even their respective receptors in cells can form hybrids that are also abundantly found in brain. 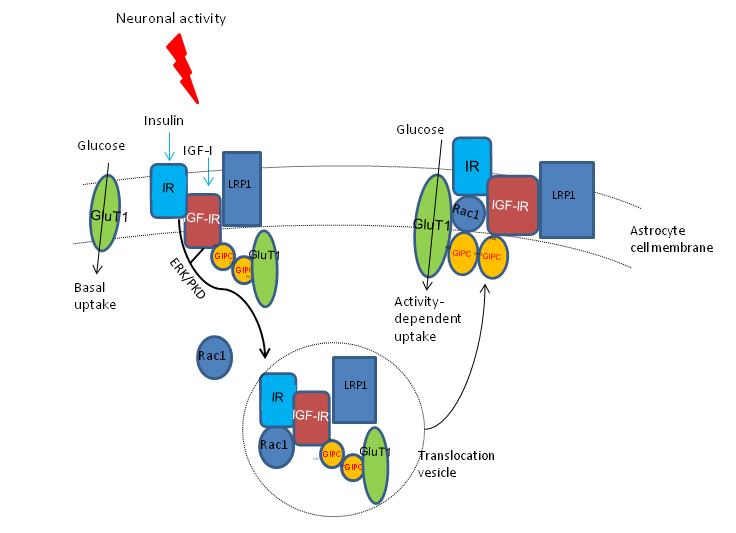 Fig. 1. Under basal conditions, the IGF-I receptor (IGF-IR) retains GluT1 inside the cell in an interaction that involves the scaffolding protein GIPC. Upon stimulation of IGF-IR and IR with their respective ligands (IGF-I and insulin), IGF-IR becomes associated to LRP1, and GluT1 strongly associates to GIPC and IGF-IR in a process where activation of the GTPase RAC1 is involved by associating with IR. As a result, IR, IGF-IR, GLUT1 and LRP1 increase their cell surface levels after the concerted stimulation by insulin and IGF-I.

Using a set of pharmacological and molecular tools in vivo and in vitro to manipulate the function of these specialized brain cells, we determined that the concerted action of these two hormones in astrocytes recruits glucose transporter 1 (GluT1), the main brain glucose transporter. Although we still do not know many details of the mechanisms involved,  a series of complex protein-protein interactions -not only of the insulin receptor, but naturally also the IGF-I receptor take place in response to the concerted action of insulin and IGF-I. The latter is triggered by neuronal activity and eventually results in the translocation of GluT1 to the cell membrane to facilitate glucose capture. Because neurons require extra glucose when they are active, this mechanism links insulin with neuronal activation. An intriguing aspect that was a byproduct of our observations is that the cooperative action of insulin and IGF-I abrogates an intrinsic negative regulation of the IGF-I receptor on glucose uptake by modifying its interactions with GluT1.

While it is early to predict the impact of these observations, the fact that insulin also regulates brain glucose supports many new avenues of research for key diseases such as diabetes, where central nervous system disturbances have been long recognized. They also provide a mechanism linking impaired insulin peptides activity with metabolic disturbances in brain illnesses such as Alzheimer´s dementia. As it is usually the case, more questions than answers have been unveiled with these findings.