Invasive species have been largely described as one of the main threats to global biodiversity. The European bumblebee Bombus terrestris was intentionally introduced in Chile in 1997 to be used as pollinator in greenhouse tomato crops because of its reputation as an effective pollinator. Despite the fact that it was introduced to pollinate tomatoes under controlled conditions, this species escaped from enclosures, invading natural habitats and over the years it has expanded its distributional range at a very high rate. A singular case is the one presented in a population of central Chile where this bumblebee species visits large patches of a native plant species, the Andean monkeyflower, Erythranthe lutea (ex Mimulus luteus, Phrymaceae). In this site, the bumblebee has increased in abundance over years (Fig. 1), as it is often observed for invasive species in the first stages of their establishment process. During the summer seasons of 2016 and 2017 we quantified the effectiveness of the invasive and native pollinator species on E. lutea. For each pollinator species we estimated the effectiveness by recording the visitation rate (visits/time/flower) and the number of pollen grains deposited on virgin stigmas. In theory, the most effective pollinator species is expected to provide the most important selective force in molding the flower phenotype, a relationship that sustained across thousand years of interaction has rendered the amazing diversity of flower shape, color, and odor found in angiosperms at present. As floral traits are expected to be under pollinator-mediated selection, we estimated the selection coefficients on tube length and corolla size, two important flower traits involved in the attraction and mechanical fit between flowers and their pollinators. 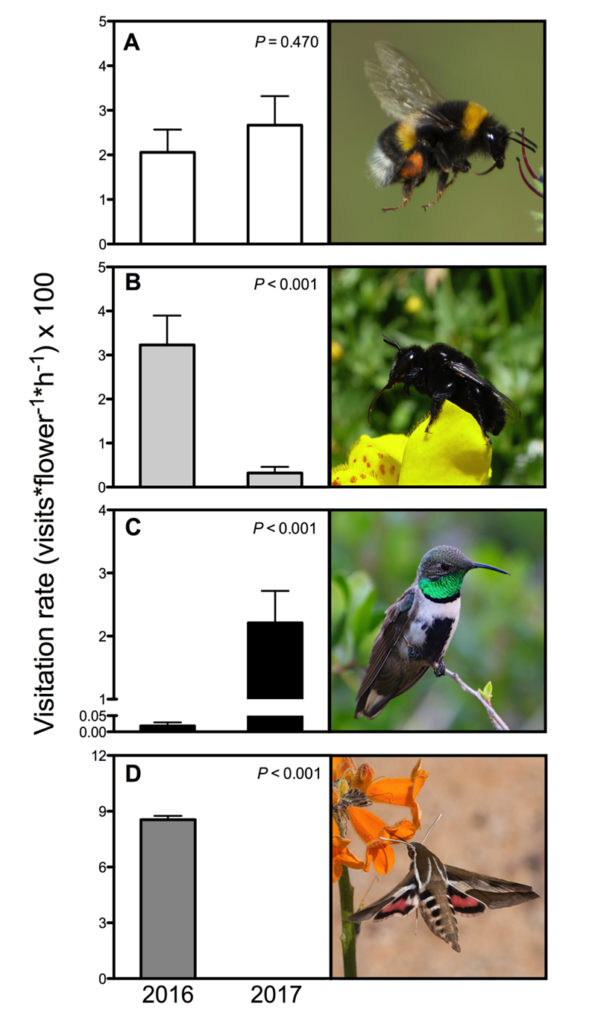 Our results revealed that the most important pollinators, in terms of visitation rate (Fig. 2a), were the hawkmoth Hyles annei followed by the solitary bee Centris nigerrima in 2016, and the invasive Bombus terrestris followed by the hummingbird Oreotrochilus leucopleurus in 2017. Interestingly, the bumblebee presented the most stable pattern of visits between years. In terms of pollen deposition, the species with the highest values were C. nigerrima followed by B. terrestris in 2016, and O. leucopleurus and B. terrestris in 2017. Regarding the mean effectiveness in pollen deposition during the two years, the invasive bumblebee was the most effective one, followed by C. nigerrima and O. leucopleurus. As in the previous analysis, B. terrestris was the less variable between years, indicating that it had not only the highest mean effectiveness but also the most stable one. These results together, indicate that in spite of being established only in the last few years in the study site, the invasive B. terrestris has become quickly the most effective pollinator species for the Andean monkeyflower.

The selection analysis showed that plants with short-tubed flowers gained reproductive advantage over plants with long-tubed flowers in 2017 and in the 2-year pooled data (Fig. 2b). While flowers of E. lutea have a tube length of 35.8 mm on the average, the shorter tongue length of B. terrestris (mean = 6.3 mm, range: 5.6 – 7.0 mm) relative to the other pollinators (e.g., the second most important pollinator, C. nigerrima had a mean tongue length = 9.0 mm, range = 8.2 – 9.8 mm), suggests that the presence of the invasive bumblebee influence the selection experienced by the Andean monkeyflower. Likewise, pollinator-mediated selection consistently favored flowers with large corollas. Previous evidence in this system indicates that bees visit corollas 1.25-fold larger than the hummingbird species, which is consistent with the idea that E. lutea is in the process of adaptation to the most effective bee pollinators.

All these findings together indicate that invasive species may, under some circumstances, become quickly the most important ones in local communities, influencing not only ecological but evolutionary processes. In the process, local flora may quickly shift plant traits toward new optimal states, provided exotics become more abundant and effective than native pollinators. The question whether the definitive establishment of invasive pollinators in new communities reinforces or ameliorates their evolutionary impact upon the native flora stresses the need for long-term studies that quantify the response to selection across generations. Results from this study suggest that the impact and novel functional roles adopted by invasive pollinators in new habitats may be more complex than previously thought and need to be urgently addressed in the face of the increased biotic exchange and homogenization.