Aluminum is the most abundant metal in the earth’s crust and its numerous chemical derivatives have various applications in organic as well in organometallic synthesis. The oxidation state +III is thermodynamically favorable for aluminum, while the chemistry of compounds with low-valent aluminum remains in its infancy. The electronic properties of molecular Al(0) compounds, such as Al(CO)2, Al(NH3) and Al(PH3) were studied in an argon matrix by absorption infrared spectroscopy. Up- to- date only two types of monomeric aluminum compounds [(NacNacAl(I) (NacNac = β-diketiminate ligand) and  [K{Al(NON)}]2 (NON = 4,5-bis(2,6-diisopropylanilido)-2,7-di-tert-butyl-9,9-dimethylxanthene)], with the oxidation state +I have been characterized which are stable at room temperature in an inert gas atmosphere for a long period of time. A neutral Al(II) complex contains one unpaired electron and is therefore very unstable and easily dimerizes or oligomerizes with formation of a compound with an Al-Al bond. Consequently it is very challenging task to isolate a monomeric Al(II) compound which will be stable at room temperature. To reach this goal an appropriate ligand has to be used to stabilize the low-valent metal center and which prevents also the dimerization of the Al(II) radical species. Cyclic (alkyl)(amino) carbene (cAAC), which was first reported by Bertrand et al., is well-known as better σ-donor and π-acceptor ligand and exhibits sufficient steric bulk at the donor center to prevent a further dimerization or oligomerization process. The cyclic alkyl(amino) carbene was the ligand of choice and resulted in the structurally characterized monomeric Al(II) radical complex of composition (cAAC)2AlCl2. 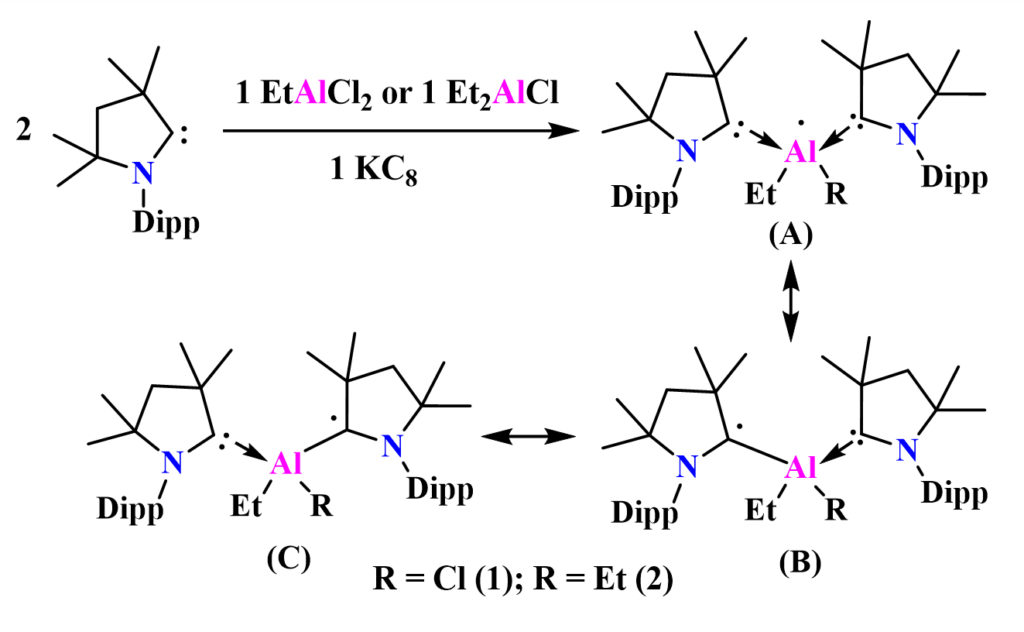 Compounds (cAAC)2AlClEt (1) and (cAAC)2AlEt2 (2) were synthesized by the one equivalent reduction of commercially available precursors EtAlCl2 and Et2AlCl, respectively with KC8 in the presence of two equivalents of cAAC (Fig. 1). Both the organo-aluminum radicals are stable in an inert atmosphere at room temperature for more than two weeks in the solid state, although they decompose in common organic solvents at room temperature.

Both the radical compounds were characterized by EPR spectroscopy which is a basic technique for the characterization of paramagnetic radical compounds (Fig. 2). Quantum-chemical calculations indicate that the structure of both compounds can be equally well described by the three resonance forms that are shown in Figure 1.