Serotiny, the maintenance of closed cones after maturation (Fig. 1), is a key adaptive trait of plants in fire-prone environments. However, in moderately serotinous species, cones may open in the absence of fire under hot and dry weather conditions. This is called xeriscence, defined as seed released induced by desiccating conditions not generated by fire. Moreover, serotiny is highly variable among species and among populations of the same species, often with an ecotypic trend. Evidence of genetic control of serotiny has been found in some species, linking the increase of serotiny to higher frequency of crown fires. 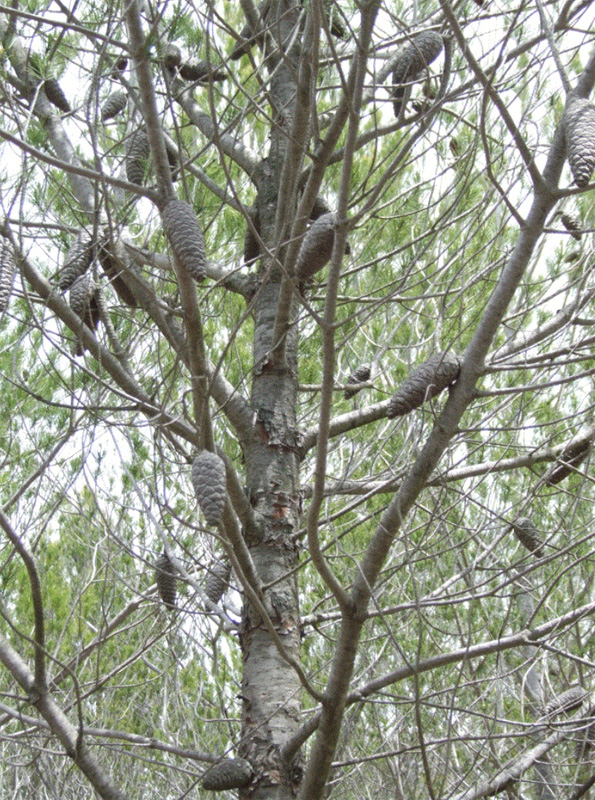 The seeds contained in canopy cone banks (CCB) allow the reestablishment of the population when adult survival is low at intermediate fire recurrences. Thus, it is key to quantify the effects of contrasting climate conditions on the variation of CCB considering the interacting plastic, allometric and genetic effects on both serotiny and cumulative female reproduction.

Phenotypic plasticity (the ability of a genotype to generate different phenotypes ​​for a given trait under different environmental conditions) is an important strategy for plants to maximize their fitness in fluctuating environments, but many phenotypic characters vary depending on growth and development. Therefore, conclusions about plasticity may change if developmental differences are taken into account, for example by studying the covariation of a given character with the size of the individual (allometry).

This study aimed at separating population differentiation (genetic effect) from phenotypic plasticity (environmental effect) of serotiny in the xeriscent species Aleppo pine under different environments, while accounting for allometric effects, and to estimate the size of the CCB across sites and populations. For this, we used an Aleppo pine common garden experiment with 19 populations, replicated in three contrasted sites (with mild, cold and dry conditions).

The ratio of closed cones (after ripening) to the total mature cones (open and closed) in each tree was used as an estimate of their degree of serotiny. We used height at 16 years as a proxy for the size of the tree and we proposed a new parameter: threshold size for serotiny loss (TSSL; Fig. 2). We used the total number of closed cones per tree to study the CCB.

The frequency of very serotinous trees was much lower at the dry site, highly expected considering that the xeriscent cones of Aleppo pine tend to open with hot and dry conditions. Tree size had a strong negative effect on serotiny, but serotiny degree differed among trial sites even after accounting for size effect, indicating a different allometric effect on serotiny at each site. According to TSSL values, the fastest loss of serotiny (in size terms) occurred at the cold site and not at the dry one (Fig. 2). Genetic variation and significant population x site interaction were also confirmed, the latter implying different plasticity of serotiny among populations. Lower summer rainfall and continentality increased both the serotiny degree and the CCB, consistent with the ecotypic trends found for Aleppo pine. Finally, the site effect found on CCB, with significantly lower values at the cold site, differed from that found for serotiny, not surprising considering that CCB is a complex trait affected by reproductive precocity and allocation as well as by serotiny itself.

In conclusion, our study provides the first experimental evidence of plasticity for two key adaptive traits related to the future persistence of Aleppo pine forests, in interaction with population differentiation. These results confirmed that growth-limiting environments exacerbated precocious seed release suggesting the existence of counter-gradient plasticity that could be maladaptive under more frequent and intense wildfires predicted by climate change scenarios.