tRNA is an integral part of the protein translation process. It translates the genetic code from mRNA to make the corresponding protein. The process of protein translation requires a well-defined structure of specific tRNA and its ability to recognize the nucleotides on mRNA (the process of codon-anticodon recognition). Natural tRNAs are heavily modified with over 90 various chemical groups that influence tRNA folding, stability, amino acids charging, as well as codon recognition and decoding. There has been increasing number of evidence showing natural tRNA modifications are involved in many biological processes and human diseases. 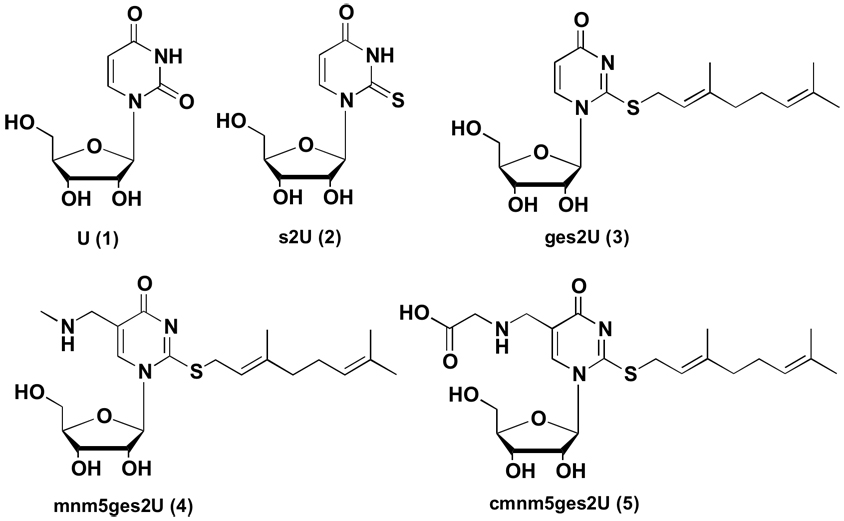 S-Geranylation on the 2-thiouridine (Fig. 1) is one of the most recently discovered tRNA natural modifications in several bacteria including E. coli, E. aerogenes, P. aeruginosa, and S. typhimurium at a frequency of up to 6.7% (~400 geranylated nucleotides per cell). This lipid modified uridine locates at the first anticodon position (wobble 34 position) of tRNA specific for lysine, glutamine, and glutamic acid. It affects codon bias and reduces frameshifting during translation. This modification not only demonstrates the current biological significance but also shows the potential to be part of the RNA-facilitated lipid synthesis in early RNA world stages. In this work we have synthesized geranylated RNA, studied their base pairing stability and specificity, and investigated their structural features in both duplexes and ribosome contexts. 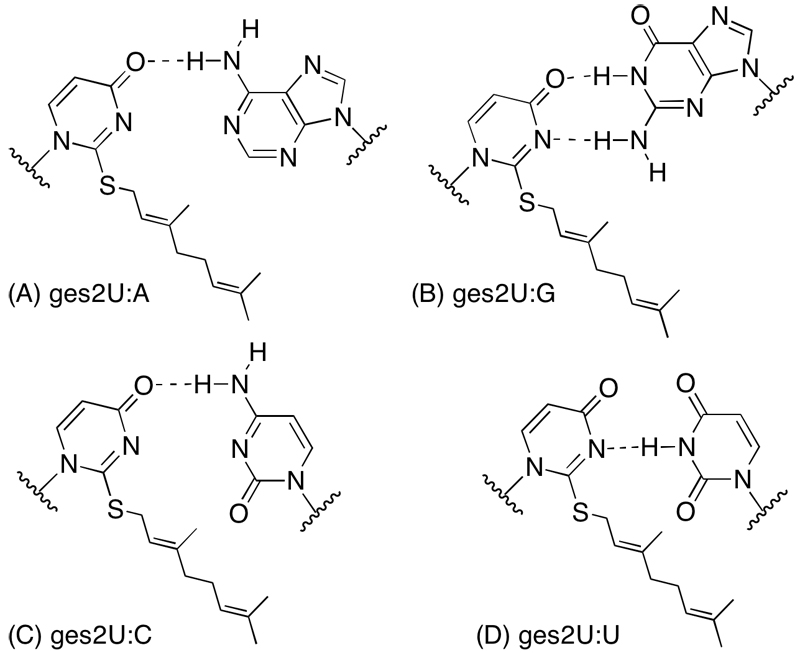 Fig. 2. Base pairing and mispairing patterns of geranylated 2-thiouridine (ges2U) with A, G, C and U respectively.

Our biophysical and molecular simulation studies collectively showed that this hydrophobic terpene group results in a much higher thermostability of U-G pair over the normal Watson-Crick U-A pair and other mispairs (Fig. 2), indicating a strong base pairing specificity and discrimination between G and other nucleobases in both duplex structures and the codon-anticodon recognition in the presence of ribosome binding. The two hydrogen bonds formed between the geranylated 2-thiouridine and the guanosine base are dominantly stable in all the structural contexts we studied. This work provides the explanation to why there is better recognition of G-ending codes over the others by geranylated tRNAs. Besides enhancing the base pairing specificity, this bulky hydrophobic geranyl group has been speculated to play other functions, such as RNA localization and RNA transportation, as well as geranyl- and seleno- involved metabolic pathways. Further detailed investigation of this unique natural modification in RNA will provide new insights into its current biological functions, and the potential evolutionary roles in early lipid synthesis.