There are well established links between traumas and psychiatric disorders such as Post Traumatic Stress Disorder, other Anxiety Disorders, and Depression.  Traumas include events that affect individuals such car accidents, rapes, and violence as well as disasters affecting populations such as wars, floods, and earthquakes. 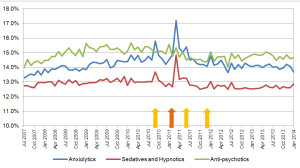 Fig. 1. Sedatives and hypnotics, anxiolytics, and antipsychotics dispensed by CDHB as a percentage of national dispensing. Arrows indicate earthquakes over magnitude 6 (February 2011 was the most devastating).

Although links between traumas and psychiatric disorders are well established for individual cases, and for sub-populations that are highly exposed to the traumatic event of interest, understanding the impact of a disaster on a larger population is more difficult.  Many studies that have evaluated the impact of a disaster on a population are limited because they are established at short notice with a highly selected study group and do not have appropriate methodology to make pre-disaster comparisons.

Our study of dispensing of psychiatric medication for the Canterbury District Health Board (CDHB), New Zealand (1) examined the impact of a series of major earthquakes on the Canterbury population.  The earthquakes started in September 2010 with a 7.1 intensity earthquake.  The most devastating earthquake in February 2011 caused major destruction, loss of life, and prolonged disruption to life and infrastructure.  The series of aftershocks was prolonged and lasted for years.  Data on dispensing of all psychiatric medication is routinely collected in a national database meaning we could examine dispensing of medication for all people in Canterbury and make long-term comparisons pre and post the earthquakes, and with national figures to rule out other longitudinal trends. 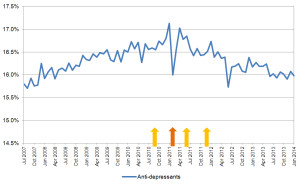 Fig. 2. Anti-depressant dispensing by CDHB as percentage of national dispensing. Arrows indicate earthquakes over magnitude 6 (February 2011 was the most devastating).

Our principle finding was of a short term increase in dispensing of sedating medications prescribed for anxiety and insomnia following the most devastating earthquake in February.  We did not show increases in dispensing of antidepressant medication or antipsychotic mediation.   These findings persisted when drops in population following the earthquakes were taken into account.  In addition, rates of dispensing of antidepressant medication actually dropped in comparison to national rates although this was a relative shift and related to a higher rate of dispensing occurring nationally.  See figures 1 and 2 for details.

Our findings are important for a number of reasons.  They highlight the importance of appropriate methodology when examining the mental health consequences of disasters.  A strength of our study’s design was the ability to look at long term data prior to and following the earthquakes in order to distinguish any post-earthquake changes in dispensing from pre-existing trends.  We were also able to make national comparisons as a further means of control.  Our findings reinforce that in a country such as New Zealand with the ability to mount a comprehensive post-disaster response that resilience is the norm and negative effects are only likely to occur for a small minority.