Breath alcohol analysis is most prevalent in determining a subject’s blood alcohol level for forensic use. This analysis is often used by law enforcement to determine if a driver is unfit to operate their vehicle on a public roadway. One complaint often brought up in conversation is that the instruments used by law enforcement “aren’t that accurate” and that they are prone to “false positives” or are “reading high” and give benefit to the prosecutors and arresting institutions. 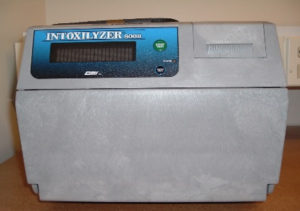 As an independent laboratory and the overseeing body of the breath alcohol program in New Mexico, this laboratory wanted to determine the accuracy and precision of the calibration for these instruments. The Intoxilyzer® 8000 is the evidential breath analyzer used in the State of New Mexico, which conforms with the National Highway Traffic Safety Administration (NHTSA) approved product list. To perform this oversight several requirements must be met such as regular quality control testing, certification and maintenance to guarantee that the results can be relied upon in criminal hearings.

The size (magnitude) of each of these sources will vary and contribute to the total uncertainty by root-sum-squares where the individual magnitudes are squared, added together and the square root calculated. If the magnitude of an individual source’s uncertainty is small enough, it can be ignored because it will not have a significant effect on the total uncertainty. The rule of one-third can be used to decide which sources are significant and which are not. Any source’s uncertainty whose magnitude is less than one-third of the largest can be considered insignificant.