Meat traditions (and the co-evolution of humans and meat)

If food is indeed “good to think”, as in Lévi-Strauss’ famous maxim, then meat seems to be the supreme example. Meat is truly about us. Besides, the way we deal with meat needs urgent reconsideration due to the many alarming environmental, economical, ethical, and health issues that are potentially connected to its consumption. It is however crucial not to overlook the historical dimensions of what we have labelled here as “meat traditions”. These traditions relate to the wide diversity of hunting, slaughtering, eating, and meat sharing activities, as well as the many rituals that accompany them. Humans and meat have co-evolved: eating meat has always been a tremendously important biosocial activity, affecting body and psyche. We suggest that in addition to personal inclinations and recent societal effects, several long-term effects on the human desire for meat are to be discerned. In our study, Maslow’s pyramid of human needs was used as a basis to chart and analyze these effects. Five levels were identified, roughly along a nature-culture gradient: 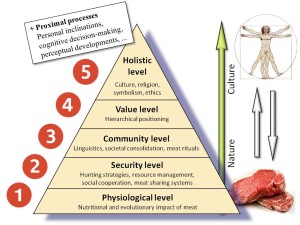 Meat, both a physical and conceptual resource, relates to fundamental human characteristics. Any policy that aims at changing our meat production and consumption patterns will have to take into account its many deep-rooted effects. Surely, meat traditions will keep on affecting the global demand for meat in the next decennia and clash to a certain degree with short-term needs for change. The possible interactions with religion, gender, cultural identity, communal structures, purchase power, and many other factors will have definitely to be taken into account.