The older we get the more likely our circadian rhythms are disrupted. For example, blood pressure not only tends to increase but as well become more irregular. Luckily, as we show here, melatonin helps to ameliorate both trends.

Rationale is that plasma concentration of melatonin, especially its nocturnal peak also declines with age in humans. Therefore, experiments were performed on retired elderly volunteers to investigate whether age-dependent changes of circadian rhythms can be reversed, their consequences be attenuated by the ingestion of timed single melatonin doses.

Fig. 1. Change of systolic blood pressure (SBP) during melatonin treatment depending on the individual value before treatment

Moreover, the higher was mean systolic blood pressure during the first week, the more it dropped on the third week (second week of melatonin administration)! Figure 1 helps to get the idea how much was the difference. 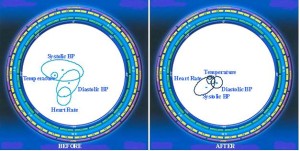 Also, melatonin did a good job in synchronizing disrupted circadian rhythms of blood pressure, heart rate and body temperature, making these circadian rhythms smoother and less irregular. Figure 2 shows how much less scattered circadian rhythms’ phases and amplitudes became. None of these effects was found in 34 placebo treated seniors, thus ruling out the possibility that rhythms could be improved just because of regular schedule and presence of medical personal who took measurements.

To resume, melatonin can be of great value for aged people suffering from hypertension as an adjuvant substance complementing basic medication. Common antihypertensive drugs do not restore the normal circadian blood pressure “dipper” profile in more than a half of patients. On the other hand we have shown in this paper that melatonin is able to stabilize circadian blood pressure and heart rate profiles and their phase relationships. The improvement of circadian pacemaker function may provide a new strategy in the treatment of hypertension. Moreover according to recent reviews, prolonged melatonin add-on appears to be effective and safe for the treatment of insomnia in patients with cardiovascular morbidity and therefore may be the first choice hypnotic for patients with hypertension.