One of the principle defects of type 2 diabetes is insulin resistance which is the inability of insulin to exert a biological action at the level of its target tissue viz. muscle, fat and liver. Metformin is the most widely used anti diabetic for controlling hyperglycemia (high sugar level in blood). As revealed by the accumulated evidence metformin is the only antidiabetic drug available for clinical use in the biguanide class. In addition to its major glucose-lowering effect, it also exerts several pleiotropic effects including beneficial changes in blood rheology, serum lipid profile, and putative anti-ischemic effects.  However Metformin is not tolerated by all the patients as many suffer from loose motions. 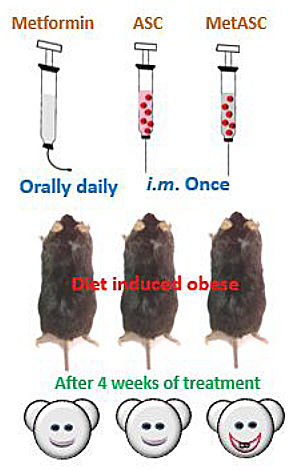 Currently, available therapies for diabetes fail to give the consistent glycemic control. Hence there is a dire need to look for an alternative treatment option. Mesenchymal stem cells (MSCs) have been proven to be immunomodulatory, anti-inflammatory, antiaging and angiogenic. MSCs are the factories to synthesize various cytokines and growth factors which are primarily influenced by local microenvironments around them. These trophic mediators not only promote the survival of surrounding cells but also play important roles in MSCs regenerative/regulatory properties both in vitro and in vivo. It has been reported earlier that systemic syngnenic injection of adipose derived stem cells (ASCs) reduces blood glucose and improves sensitivity to insulin in Diet Induced Obese (DIO) mice. Preconditioning/Priming/pre-treating of MSCs with a suitable compound or media has been shown to be extremely effective in treating a diabetic heart. There are no reports so far showing the effect of metformin pre-treated ASCs in insulin resistance. Here, we demonstrated for the first time the beneficial effects of intramuscular injection of metformin preconditioned ASCs in ameliorating insulin resistance and reversing type 2 diabetes.

We examined whether pre-treatment of adipose derived mesenchymal stem cells (ASCs) with metformin could have a better therapeutic value for the reversal of type 2 diabetes. We compared the effect of metformin, ASCs and metformin preconditioned ASCs (MetASCs) in high fat diet induced C57BL/6 mice by injecting the cells intramuscularly only once where as metformin was given at a concentration of 300 mg per kg body weight orally daily. Fasting glucose was measured every week for 4 weeks. At the end of the study, levels of insulin, triglycerides, IL6 and oxidised LDL were evaluated from the serum. There was a remarkable decrease in hyperglycemia within two weeks of injection by MetASCs as compared to metformin and ASCs alone. Gene expression studies were performed for muscle (GLUT4) and liver tissues (IL6 and PAI1).Gene expression studies for muscle tissue revealed the drastic upregulation of GLUT4 gene levels in the MetASCs group indicating enhanced glucose uptake in muscle. Liver tissue analysed for the genes involved in inflammation viz. IL6 and PAI1 showed significant downregulation in the MetASCs group as compared to the other groups. This is a first report demonstrating the synergistic effect of metformin preconditioning of ASCs leading to reversal of hyperglycemia, hyperinsulinemia and triglyceridemia.

Our study is unique because it has made use of a combination of adipose tissue stem cells with metformin. All earlier studies have used intravenous route of injection of stem cells, however in this investigation we have used intramuscular route which is easier and acts directly on muscles to decrease insulin resistance which is a root cause of type 2 diabetes.