Mind-wandering plus mindfulness: say ‘no’ to negative mood or depression

Mind wandering and its equivalent concepts such as self-generated thought, stimulus independent thought, task-unrelated thought, and spontaneous thought refer to a mental phenomenon that occupies considerable time in everyday life. The high frequency of the occurrence of mind wandering has made researchers interested in studying its different aspects, such as its underlying brain activity and its functions and consequences. 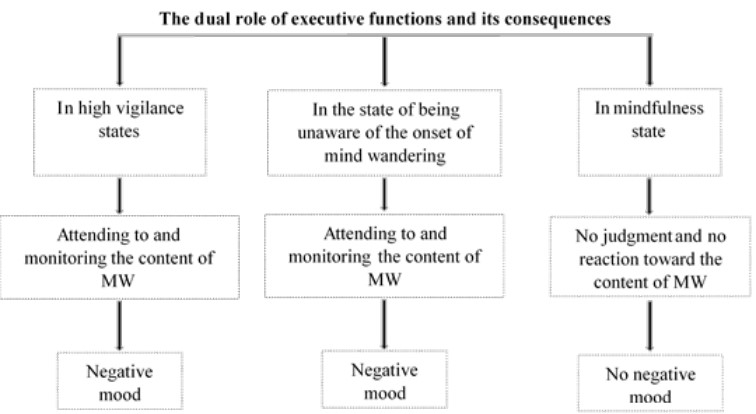 In terms of brain activity, several brain imaging studies show that the default network (DN) and frontoparietal control network (FPCN) are two prominent brain networks that are active during mind wandering. The DN is the collection of certain brain regions that exhibit more activity during rest compared to when we are engaged in a task. The FPCN is the neural substrate of executive functions. Executive functions are a set of mental skills such as planning, memory, monitoring and controlling behavior and mental activity. 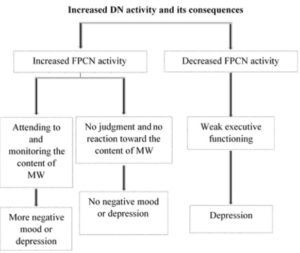 But how does all this relate to mindfulness? Evidence from studies of meditation practices, including mindfulness meditation, helps to provide an answer. In mindfulness meditation the focus is on the present moment. In this state, there are no reaction and no judgment (i.e. detachment) toward what arises in the body and mind as well as in the external word. When mind wandering occurs during mindfulness, the activity of both the DN and FPCN increases but no negative mood is observed. The lack of negative mood results from the function of the FPCN which becomes engaged during mindfulness. This results in not reacting to or thinking upon the content of mind wandering.

To sum up, the FPCN, as the neural correlate of executive functions, can play a dual role. It can generate or prevent negative mood. Despite the similarity between depression and mindfulness in terms of the increase in DN activity, the weakness of executive functions in depression cannot prevent negative mood. This suggests that the therapeutic interventions for depression should focus on ways other than usual ways such as suppressing DN activity.