The mammary gland is an organ that develops almost completely after birth. It has been extensively studied and its development is well-characterized. As such, it provides an excellent model system to study the details of mammalian organ development. Furthermore, the structure of the gland is simple (relatively, when compared to some other mammalian organs), making it well-suited for the study of the cellular and molecular mechanisms involved in organ development using a mathematical modeling approach. 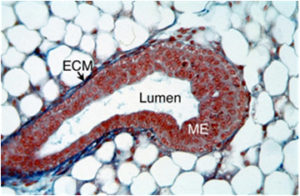 Mammary gland development is initiated by estrogen signaling during puberty, and is characterized by ductal invasion through the fat pad, spearheaded by terminal end buds (TEBs). TEBs are bulbous structured composed of highly-proliferative epithelial cells, and are bilayered with an inner luminal layer and an outer myoepithelial layer, corresponding to the two phenotypically distinct layers within the mature gland. This progenitive population is thought to be supported by a small population of bipotent mammary stem cells. Within the TEB, many molecular signaling mechanisms are involved in development, maintenance of cell population homeostasis, and regulation of cell-level events, among which estrogen and amphiregulin (AREG) signaling play important roles in controlling development and cell proliferation.

Our recent publication details the development of a multiscale model of the TEB to study the underlying cellular and molecular mechanisms involved in mammary gland development. We model the TEB using two distinct, but hybridized, scales: a discrete cell-scale model, implemented on top of a continuum molecular scale. Each cell is described individually, with its own unique properties, while each molecule of interest is described and solved for mathematically using Fick’s law of diffusion (a time-dependent partial differential equation, which describes the changing molecular concentration across the domain in both time and space). The two scales feedback into each other, with cells obtaining information about the molecular concentrations at their location, and modifying these concentrations as appropriate for their individual characteristics.

In order to shed light on a few of the most important factors in mammary gland development and to validate our model’s ability to predict outcomes observed in the biological system, we have focused our study on the effects of two main factors: cell hierarchies and molecular signaling, as shown in Figures 1 and 2. Within cell hierarchies, the proliferative population is responsible for generating the new cells involved in organ growth, as regulated by the molecular signaling mechanisms. Cells must be limited in their proliferation in organ development, as to only what is needed for the organ to develop properly.

When a cell divides, its daughters may also be able to proliferate, or not (referred to as “terminally differentiated”), or the daughters may be different, with one of each type. When a cell divides into two daughters which may also proliferate, the total number of proliferative cells in the TEB increases. This is offset by differentiation, when a cell becomes unable to proliferate, and also by cell death (called apoptosis), which is responsible for formation of the open lumen space within the duct. We found that cells must average 2-3 proliferation cycles before differentiation in order to maintain the cell population with in the TEB and successfully replicate population dynamics observed within the developing and mature mammary gland. This result is in excellent agreement with current experimental literature. 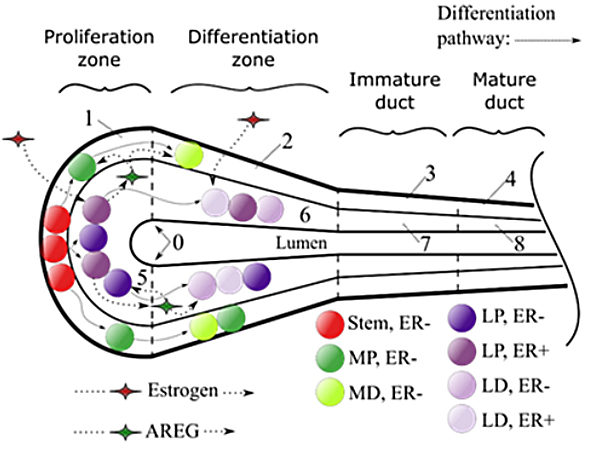 Fig. 2. TEB structure, cell phenotype hierarchy, and signaling pathways. TEB is composed of two layers, outer myoepithelial (regions 1-4) and inner luminal (regions 5-8), surrounding the ductal lumen cavity (region 0). Both myoepithelial (M) and luminal (L) populations are maintained by a small population of stem cells, which give rise to progenitor (P) populations in both regions; progenitors may divide symmetrically into progenitor or differentiated (D) daughters, or asymmetrically, giving rise to one of each phenotype. Estrogen enters the TEB from the surrounding bloodstream, signaling to ER+ phenotypes, driving proliferation in the ER+ population and upregulating AREG signaling to the downstream ER- population, stimulating proliferation in the ER- population.

Hormonal signaling was seen to be of equal importance, with as little as 7-10% decrease in signaling intensity (the greater the decrease in intensity, the lower the proliferation potential) resulting in as much as 60-80% reduction in gland development rate. In all cases tested, we observed a consistent, closely-controlled signaling mediated reduction of growth, which maintained gland development rates within biologically reported values. Interestingly, we observed that our model was capable of high growth rates (faster than any rates reported in the literature), indicating that hormonal signaling mechanisms play a key role in not only stimulating gland development, but also in regulating development rates as well. Taken together, our results showed good correlation with reported biological values, while at the same time shedding new light onto some of the cell level phenotypic dynamics and interplay involved in gland development.