Polyethylene oxide (polyox) has been extensively used as a controlled release excipient to modulate drug release from solid hydrophilic matrix preparations. The attraction of polyox as a polymer matrix is due to its high swelling ability, compressibility and good solubility in water. 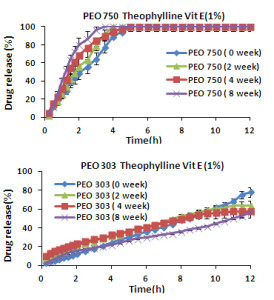 The main objective of the present research was to examine the stability of polyox within tablet formulations containing various soluble drugs. We wanted to investigate if the efficiency of vitamin E as an antioxidant stabilizer for polyox matrices is dependent on the type of model drug formulated. Vitamin E (α–tocopherol) was selected as an antioxidant because it is a competent stabilizer against oxidation of polyethylene. Three model drugs, namely propranolol HCl (solubility: ~ 50 mg/mL), theophylline (~ 8 mg/mL) and zonisamide (solubility: ~ 0.8 mg/mL), were selected to cover a range of solubilities. Batches were formulated using a low (polyox 750) and high (polyox 303) MW polyox incorporating vitamin E succinate at 1% w/w, and these were placed under the same storage conditions (40 °C) and tested at 0, 2, 4 and 8 weeks. 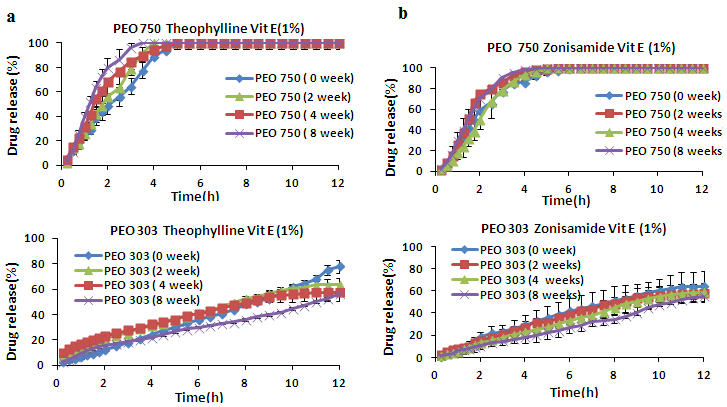