During plant embryogenesis the primary axis of development is established by two groups of pluripotent cells: the shoot apical meristem ( SAM ), responsible for aboveground organs generation, and the root apical meristem (RAM), responsible for underground organs production. During postembryonic shoot development, axillary meristem (AM) initiation and outgrowth are responsible for the production of each and all secondary axes of growth including inflorescence branches or flowers. As leaf primordia are formed on the flanks of the SAM, a region between the apex and the developing organ is established and indicated as boundary zone. The interaction between hormones and the gene network in the boundary zone is fundamental for AM initiation. AMs function as new SAMs: once the axillary bud with a few leaves is formed it can either stay dormant or develop into a shoot branch to define plant architecture, which in turn affects assimilate production and reproductive efficiency. Therefore, the radiation of angiosperms was accompanied by a huge diversification in growth forms that determine an enormous morphological plasticity helping plants to adapt themselves to environmental changes. 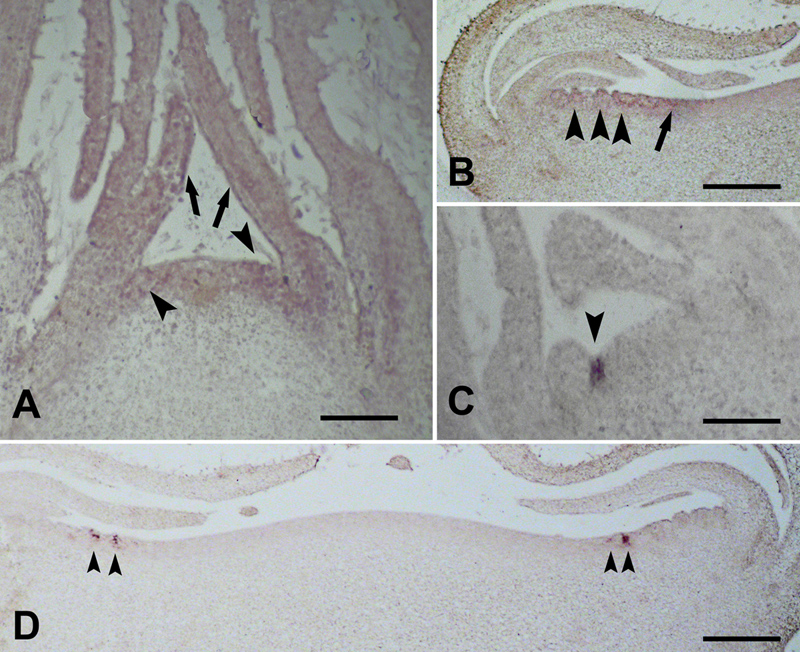 Fig. 1. Patterns of transcript localization of Ha-LSL (A-B) and Ha-ROXL (C-D) in sunflower (Helianthus annuus L.) meristems. A and C longitudinal sections of vegetative shoot apical meristems (SAMs); B and D longitudinal sections of inflorescence shoots hybridized with Ha-LSL (B) and Ha-ROXL (D) antisense probes. In A, Ha-LSL RNA accumulation was detected in a domain within the boundary zones separating the SAM and the leaves (arrowheads) as well as in very young leaves (arrows). In B, Ha-LSL transcripts were detected in tubular (disc) flower primordia (arrowheads) and along the inflorescence meristem (arrow). In C, the Ha-ROXL mRNA was detected in a small domain within the boundary zone separating the SAM and the leaf primordia (arrowhead). Ha-ROXL transcripts (arrowheads) were accumulated in disc flower primordia before the separation between floral bract and floral primordia (D). Scale bars represent: 230 μm in A, 440 μm in B, 140 μm in C, 310 μm in D.

Wild sunflower (Helianthus annuus) plants develop a highly branched habitus with numerous small flowering heads. The origin of a non- branched sunflower, with a single and large head, has been a key event in the domestication process of this species. We isolated two sunflower genes putatively involved in this process, namely LATERAL SUPPRESSOR (LS)-LIKE (Ha-LSL) and REGULATOR OF AXILLARY MERISTEM FORMATION (ROX)-LIKE (Ha–ROXL) encoding for a GRAS and a bHLH transcription factor (TF), respectively. Typical amino acid residues and phylogenetic analyses suggest that Ha-LSL and Ha-ROXL are the orthologs of the branching regulator LS and ROX/LAX1, involved in the growth habit of both dicot and monocot species.

ISH analysis showed that Ha-LSL transcript was not restricted to the boundary zones in vegetative and inflorescence shoots but the mRNA activity was expanded in other cellular domains of primary SAM (Fig. 1A) as well as AMs. In addition, Ha-LSL transcript accumulation was also detected in leaves and floral primordia at early stages of development (Fig. 1B). These results were corroborated by qRT-PCR analyses that proved high levels of Ha-LSL transcripts in very young leaves and disc flowers, suggesting a role of Ha-LSL during the early outgrowth of lateral primordia. Further investigation of the role of Ha-LAS and molecular cloning of other lateral primordia regulators, should allow a comprehensive study on the interplay of developmental and environmental as well as hormonal signals, which are integrated to control AM and flower development. Ha–ROXL transcription, instead was strongly restricted to a small domain within the boundary zone separating the SAM and the leaf primordia (Fig. 1C) and in restricted regions of the inflorescence meristem, beforehand the separation of floral bracts from disc flower primordia (Fig. 1D). These results suggest that Ha–ROXL may be involved in the establishment of a cell niche required for the initiation of AMs as well as flower primordia. We can speculate that Ha-ROXL, most likely in concert with other boundary genes, acts to specify boundary zone identity. In particular, in sunflower inﬂorescences, the peripheral extremity of the flower primordia arise ﬁrst as subtle bumps; then each primordium assumes a parallelogram form. A bisecting crease divides the primordia in two distinct bumps that follow different fates (the abaxial part of the primordium becomes the bilaterally symmetrical bract and the adaxial part becomes the ﬂower) and just before this commitment we are able to detect the activity of Ha-ROXL.