Cells are the structural and functional basic units of a given organism to support its life. The phenotype of an organism is highly determined by proteins at the molecular level in each cell. Imbalance of gene expression can provoke the disorder of protein functions and cellular metabolism. In eukaryotes, due to the large coding capacity of pre-mature messenger RNA (pre-mRNA) necessary to maintain the endogenous biological processes, post-transcriptional gene regulation (PTGR) is known as a pathway contributing to direct the fates of various pre-mRNAs ranging from RNA processing, transportation, localization, translation and degradation. Regulation can be achieved by RNA-binding proteins (RBPs), which contain the RNA-binding capacity and function through the formation of ribonucleoprotein complexes (RNPs). All mRNAs in their lifetime should be regulated by messenger RNA-binding proteins (mRBPs) through PTGR pathways. 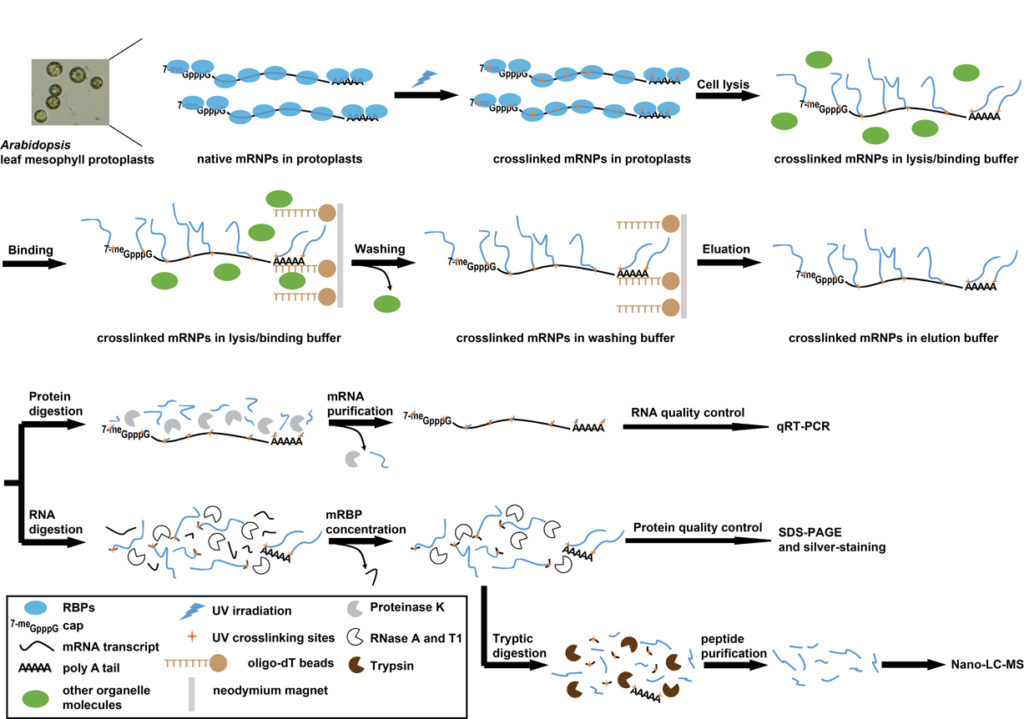 A more rapid way to predict genome-wide RBPs relies on the computational strategies by use of protein sequence, structure and protein-RNA docking. However, the information for in silico strategies is generally based on the well-known canonical RNA-binding domains (RBDs). This could cause the bias that the emerging of moonlighting RBPs containing non-canonical RBDs has been recently reported. Therefore, development of in vitro and/or in vivo approaches is critical to complement in silico strategies. The first genome-wide mRNA-bound proteome has been characterized for human HeLa, HEK293 and HuH-7 cell lines, embryonic stem cells (ESCs) and yeast cells by use of an in vivo approach called “mRNA interactome capture”, which allows to comprehensively explore functional mRBPs from the physiological cellular environment. The method relies on in vivo UV crosslinking of nucleic acids and proteins, followed by pull-down, stringent purification procedure of messenger RNPs (mRNPs) and protein mass spectrometry (MS). In vivo crosslinking by high intensity of UV irradiation (254 nm, UV-C) could create the formation of covalent bonds between nucleotides and protein residues in the range of only few Angstroms (Å), considered as “zero length”.

Applying optimized mRNA interactome capture method to plant leaf mesophyll protoplasts
Compared with the studies of mRNA-bound proteomes in yeast and mammalian cells, discovery of plant mRNA-bound proteomes is still in an early stage. Despite of this, such method has been recently applied for exploring plant mRNA-bound proteomes from Arabidopsis thaliana etiolated seedlings, leaf tissues and root cells, indicating the wide usefulness of this method for detecting the plant functional RBPs in the future. Here, we present the protocol of optimized system of mRNA interactome capture method that applying this to Arabidopsis thaliana leaf mesophyll protoplasts (i.e. cells without cell walls), which is a cell type used in functional cellular assays. The whole method entails in vivo UV crosslinking, pull-down, purification of mRNPs by oligo-dT beads and the subsequent identification of mRBPs by MS, which is similar to the reported interactome capture approaches for yeast and mammalian cells (Fig. 1). 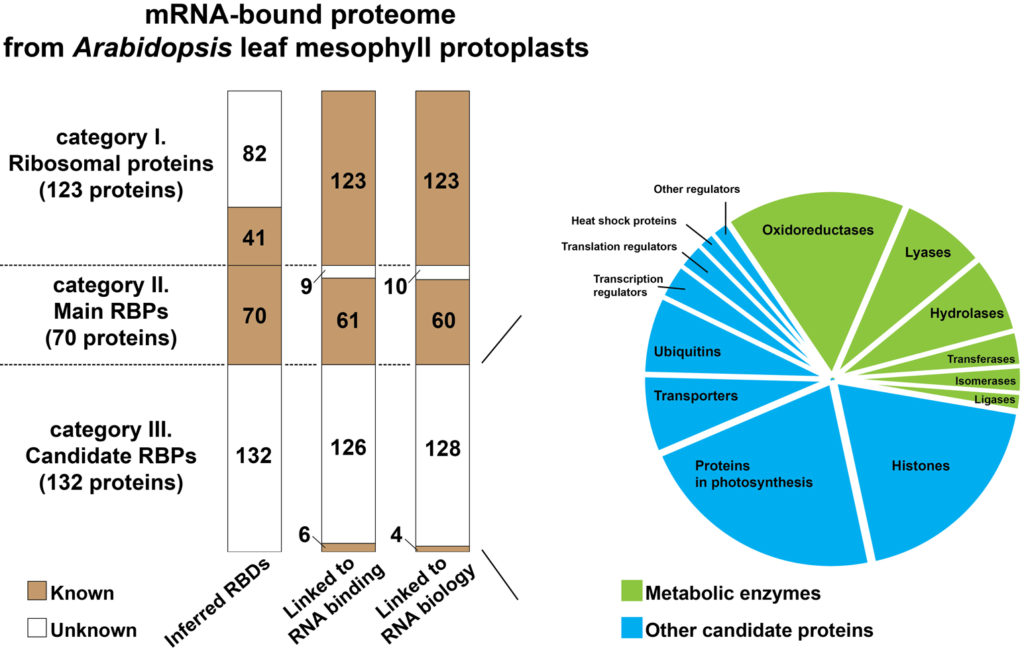 Importance of this protocol: providing the optimal conditions
The optimal protein yield relies on the amount of starting tissue and the duration of UV irradiation which has been illustrated in the protocol. This allows the researchers working more efficiently when studying the RBP-RNA interactome by use of protoplasts. Meanwhile the identified mRNA-bound proteome containing the overrepresented annotated RBPs with RNA-binding capacity and novel moonlighting RBPs could be treated as a reference list when comparing with these from other plant cell types and species (Fig. 2).