Multiple tasks for the c-ring of the F1FO-ATP synthase

The F1FO-ATP synthase is the only enzyme in nature endowed with bi-functional catalytic mechanism of synthesis and hydrolysis of ATP. The enzyme complex is hosted in the inner mitochondrial membrane in eukaryotes and in the plasma-membrane in bacteria. Under aerobic conditions this enzyme complex has the main task of building the molecule of ATP, the energy currency of the cell. This catalytic function is carried out by the hydrophilic portion F1, while the membrane-embedded FO allows the flux of positive ions (H+ or Na+) across the membrane. The coupled rotation of FO and F1 driven by ion passage within FO allows catalysis. If ion current is downhill, namely it follows the electrochemical gradient between the two membrane sides, the counterclockwise rotation (viewed from F1) allows ATP synthesis. Otherwise, the energy provided by ATP hydrolysis, associated with clockwise rotation, can be exploited to pump ions against the electrochemical gradient of the membrane. This happens when the membrane potential drops under a certain threshold. 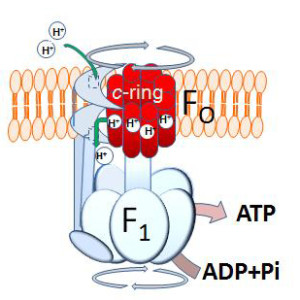 Recently, other key functions of the F1FO complex are emerging, in which the core of FO, namely the so-called c-ring, seems to be the master player. The c-ring has the shape of a cylinder built by a palisade of match-like subunits. The subunit number is a feature of the species; it is eight in mammals and up to 10-14 in bacteria and chloroplasts. Evolution seems to favor small c-rings due to their efficient bioenergetic strategy, as we will see later. The basic structure of the c-ring is relatively simple, but, thanks to species-specific differences, confers to this mini-cylinder the role of main character in the whole enzyme machinery. Accordingly, the subunit number determines the c-ring size: as each subunit binds one ion, the subunit number corresponds to the number of ions which should cross the membrane to make the whole structure rotate and make ATP from ADP and inorganic phosphate. Any complete rotation (360°) of the catalytic portion F1 allows the synthesis of 3 ATP molecules. Therefore, large c-rings imply a higher cost of ATP with respect to relatively small c-rings (8 subunits), since more ions must be transported to make the cylinder rotate. When few ions can make the c-ring rotate, ATP is said to be cheap, namely it costs a small number of ions. So, ATP cost is linked to the subunit constitution of the c-ring.

On the other hand, due to its higher sensitivity to membrane potential, a small c-ring makes the ATP synthase more easily switch to the ATP hydrolase function than a large c-ring. Another key task of the c-ring is its putative involvement in the mitochondrial permeability transition, an event which by increasing membrane permeability, leads to cell death and is associated with most mitochondrial dysfunctions. Finally, the aminoacid sequences of c subunits slightly differ in different species and consequently the c-ring is differently susceptive to peculiar post-translational modifications which affect its function. So, on considering the central role in bioenergetics of the whole F1FO machinery and the peculiar c-ring features, indeed the c-ring has a great appeal as drug target. In this perspective, by exploiting the differences between mammals and bacteria and also between different bacteria, new antibacterial drugs can be developed by mimicking known enzyme inhibitors which target the c subunits.

In summary, the intriguing c-ring lies on the cutting edge between life and death and can also be chemically manipulated to determine lethal or vital events.