Skeletal muscle is the largest organ of the body and is responsible not only for movement , breathing and posture, but is also important in regulating body temperature. It is not surprising that defects in muscle function have a large impact on the quality of life. More than 700 different conditions are known in which skeletal muscle function or mass is affected. In The Netherlands about 200000 patients  (~1% of the population) are diagnosed with a muscle-wasting condition. Several of the muscle diseases have a severe course of disease and patients lose the ability to walk and breath. The treatment options for patients are limited and often only palliative care is available. The only way to develop novel and effective treatments is to better understand the mechanisms that damage skeletal muscle. The present study focused on understanding the mechanism of muscle wasting in Pompe disease. 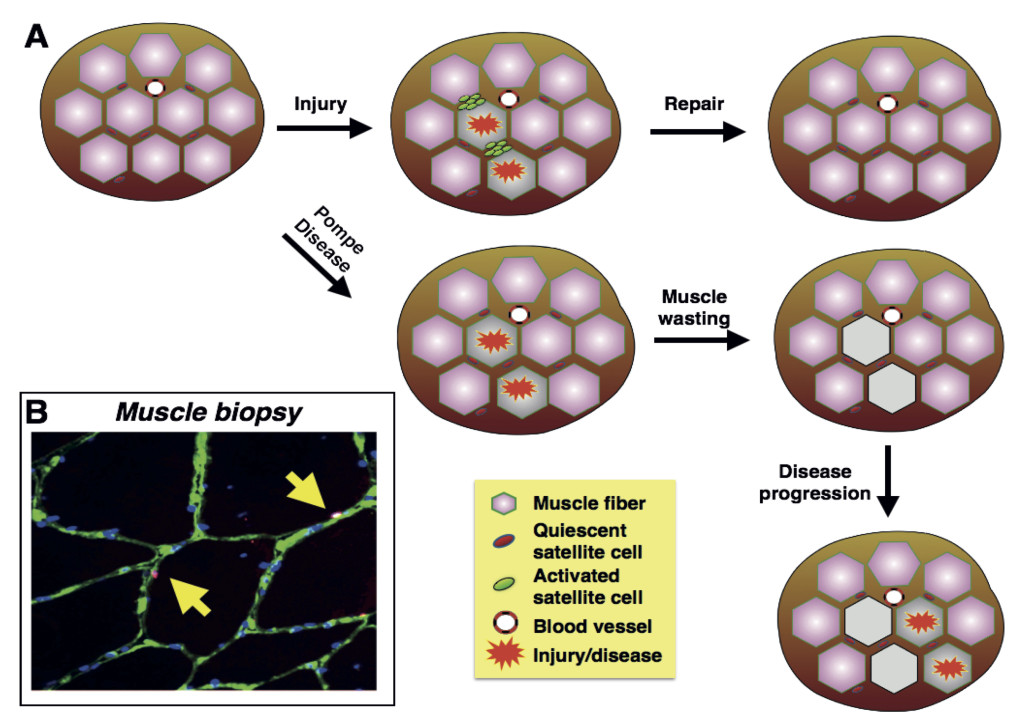 Fig. 1. Schematic representation of muscle regeneration in healthy and diseased muscle. (A) In healthy muscle satellite cells are rapidly activated by muscle damage and mediate quick and complete repair. This is reflected by a strong increase in proliferating satellite cells (indicated as green cells in upper track). In muscle of Pompe patients damage accumulates in the muscle fibers, but the satellite cells are not activated and fail to initiate repair (lower track). The result is an empty (vacuolized) non-functional muscle fiber (indicated as white ‘muscle fibers’). As disease progresses more and more muscle fibers become damaged until the function of the whole muscle is lost. (B) Identification of satellite cells in a cross section of a healthy muscle biopsy by immunohistochemical analysis. The muscle cell membrane (sarcolemma) is depicted in green, muscle nuclei in blue and satellite cells in red.

Pompe disease is an inherited muscle disease and is caused a deficiency in the enzyme acid alpha glucosidase (GAA). The reduced activity of GAA results in accumulation of glycogen that damages skeletal muscle, in particular. In infantile patients that are born without detectable GAA activity the heart is also affected. The infantile patients display a rapid course of disease and die within the first 18 months of life when left untreated. Other patients may develop first symptoms at a later age depending on the level of GAA in their tissues. The progressive loss of the capacity to breath is a major cause of death for Pompe patients.

Since 2006 enzyme replacement therapy (ERT) has become available that extends the life of infantile patients and ameliorates symptoms of other Pompe patients, in particular in the first years after start of treatment. However, ERT is not equally effective in all patients as uptake in skeletal muscle is limited and patients may develop an adverse immune response. Furthermore, ERT has limited potential to reverse severe damage that has already accumulated in the muscle and is extremely expensive.

Skeletal muscle has a remarkable potential to regenerate after damage. This repair is completely dependent on muscle stem cells, called satellite cells (Fig. 1.). The satellite cells are located at the periphery of muscle fibers (Fig. 1.), enabling a rapid response to damage. In this study the status of muscle stem cells and repair were investigated in muscle biopsies of Pompe patients across all ages and stages of disease. The patients’ muscle samples showed clear muscle damage, but still satellite cells were detected in equal numbers as compared to samples from healthy controls. Surprisingly, the satellite cells were in an inactive or ‘off’ state, while the extent of damage should have massively activated the stem cells to repair the damage (Fig. 1.). The patients’ samples also did not show any signs of ongoing muscle repair, which fits with the inactivity of the satellite cell population. These findings suggest that Pompe patients’ satellite cells do not ‘see’ the damage developing inside the muscle cells. The lack of satellite cell-mediated repair together with the ongoing glycogen accumulation and damage in the muscles may contribute to the muscle wasting that is observed in the patients. The exciting possibility is that the presence of satellite cells at normal levels in patients’ muscles may also present a treatment opportunity. The currently available treatment is dependent on the state of the patients’ muscles. Novel therapies capable of activating the muscle stem cells may be used to regenerate damaged muscle and increase the efficiency of ERT.