New strategy for the degradation of persistent pollutants in water

An hybrid solid system for the degradation of persistent pollutants was realized by mixing titanium dioxide, silica and an enzyme extracted from soybean hulls.

Removal of organic pollutants from urban and industrial wastewaters is one of the main topics in modern research because, in addition to the typical pollutants deriving from human activities, many new chemicals were detected in wastewaters in the last years as a result of new industrial processes and increased consumption of pharmaceuticals and personal care products (PPCPs). Unfortunately, the chemical-biological treatments used in modern sewage treatment plants are often ineffective in the removal of substances present in very low amount. Moreover, some of PPCPs and their metabolites are very stable in water and recalcitrant to degradation with the common treatments, so exercising for long periods an adverse effect on the environment. 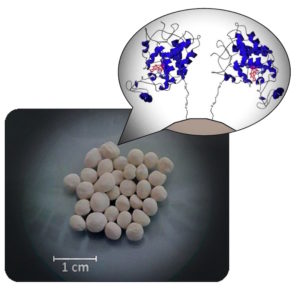 Fig. 1. Image of the silica monoliths. The enlarged picture on the right shows the bond of soybean peroxidase molecules (in blue) on the surface of the monolith (in brown).

New strategies to solve the problem are currently under study. The researchers of the Chemistry Department at the University of Turin (Italy) realized a hybrid system able to effectively degrade a group of dyes and the persistent anticonvulsant drug carbamazepine. The system combines the photocatalytic properties of titanium dioxide (TiO2) with the oxidative potential of the enzyme peroxidase extracted from soybean (Glycine max) hulls. Before the mixing with TiO2, the enzyme was previously immobilized on solid silica monoliths prepared by mixing a commercial silica powder with bio-based substances obtained from composted urban wastes. The final product is a stable and easy-to-handle support that allows, at the same time, to stabilize and protect the peroxidase, as well as to exchange substances with the solution as result of its high porosity and hydrophilicity (Fig. 1).

The operating mechanism of degradation starts with the light-mediated activation of titanium dioxide, which generates different species of reactive oxygen species (ROS) like hydroxyl radical, superoxide anion or hydrogen peroxide. The presence of hydrogen peroxide induces the activation of soybean peroxidase, with formation of its highly oxidative intermediates. The result is the contemporary action of enzyme and ROS on the target molecules, with a progressive degradation and removal of all of them from the testing solution (Fig. 2). 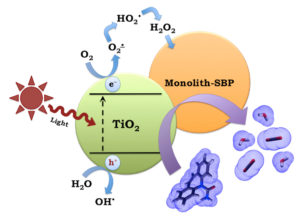 Fig. 2. Schematic representation of the chemical reactions induced on the titanium dioxide/monolith-SBP system by irradiation with UV light.

The synergic action of photocatalytic mechanism and enzyme action produces a faster removal of all the species studied. Particularly significant are the results obtained in the  treatment of carbamazepine solution where the peroxidase itself is almost ineffective, but it is still able to speed up the removal rate respect to TiO2 alone.

An interesting aspect of this method is the possibility to use a different reaction pathway without changing the experimental conditions, but only by mixing the two catalysts. Indeed, in a previous study concerning the degradation of the toxic and carcinogenic pesticide 2,4,6-trichlorophenol by using the TiO2/peroxidase system, we were able to demonstrate as the hybrid system caused the formation of different and less toxic intermediates respect to the two methods used separately.

In conclusion, this approach seems to be interesting and effective for the removal of recalcitrant pollutants. Other studies are currently underway to better clarify the reaction mechanism and, therefore, to be able to design more stable and efficient systems based on the same principle.