Bacteria are able to utilize various carbon sources, and change the intracellular metabolic fluxes depending on the availability. Whereas much effort has been taken to understand the underlying mechanisms, most parts of them are still elusive and remain to be examined. Technically, metabolome analyses provide a comprehensive view of the level of each metabolite in the cell as a snapshot, and also provide a way to trace the steady state metabolic flux using 13C-labelled compounds. However, these methods are not suitable to monitor the sequential metabolic changes, which usually occurring in batch-cultured bacteria. In addition, these methods require major and expensive facilities and also the procedures encounter difficulties in dealing with small scale cultivation. 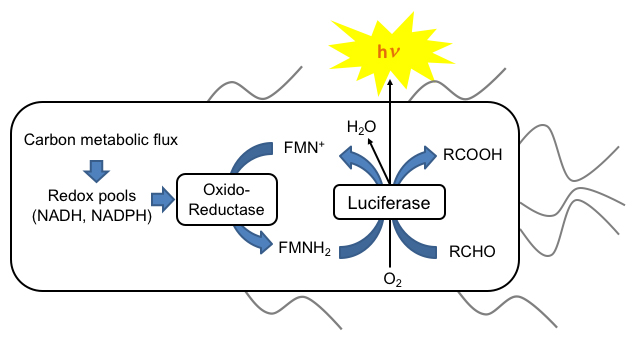 The bacterial luciferase activity in vivo is expressed not only dependent on the enzyme level but also on the intracellular redox condition and the levels of the substrate aldehyde and O2. Using the batch-cultured Escherichia coli cells in which the Vibrio fischeri luciferase proteins (LuxA and LuxB) were constitutively expressed, we observed drastic fluctuations of the light emission along with the growth phase. Further analyses indicated that these changes reflected the condition of intracellular redox pools, such as NADH and NADPH (Koga et al., MGG 2004), which should correlate with the carbon metabolic flux producing the reducing power (Fig. 1). The luciferase activity can be easily measured with less than 100 ml of liquid cultivated medium by luminometer, and thus, it was suggested that the changes of carbon metabolic conditions are inspected using this bacterial luciferase system in a non-destructive and real-time way. 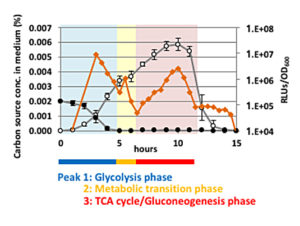 To demonstrate the utility of this system, we cultivated E. coli cells in the presence of limited amounts of glucose and measured the fluctuation of the luciferase activity as the time course. It has been well described that E. coli cells first utilize glucose and excrete acetate, and then they take up and utilize acetate subsequent to the depletion of glucose. Under glucose-depleted conditions, a series of sequential peaks of luciferase activity appeared from the lag phase to the end of cell growth (Fig. 2). Noteworthy, the luciferase activity was changed 102~3 times in relative luminescence units (RLUs) / OD600 within several tens of minutes under unchanged level of the luciferase protein. To get insights into the regulation of carbon metabolism, luciferase activity profiling was performed under additional carbon sources or in some mutants, each of which was deficient in an enzyme or a regulatory factor involved in the central carbon metabolic pathway. Based on these analyses, we assigned the relevance of each peak to the corresponding phase of central carbon metabolism (Shimada & Tanaka, AEM 2016). In addition, we unexpectedly observed a small peak between glycolysis phase and the TCA/gluconeogenesis phase. In the report, we concluded that the small peak corresponds to metabolic transition phase for the transition from the glycolysis phase to the TCA/gluconeogenesis phase. Unexpectedly, we found that this transition was dependent on the acetate excretion pathway, but not on the gene expression regulation by cAMP/CRP.

Taken together, we propose that the bacterial luciferase monitoring system is useful to estimate the real-time dynamics of changing metabolic status in living bacterial cells with inexpensive facilities and small scale cultivation. More recently, we found that the fluctuation of the luminescence could be detected even from single cell under luminescent imaging microscopy, which confirmed the advantage of this system to monitor the metabolic condition in a living single cell.